On Friday, someone on The Elvis Duran Morning Show called that guy from that show about people who live in/around New Jersey “an evil dragon” because of a remark he made regarding his predatory view on casual sex. I’m sure that the sound bite is floating around somewhere, but I couldn’t find it.

Anyway, I was mildly inspired to draw him as a dragon, although I’ll admit that I know nothing about him, aside from the fact that he’s profoundly unfunny. A little Googling around brought some pictures of him, but with few identifying marks aside from well-defined abdominal muscles and largish ears, I had nothing that I really wanted to work with (although a more dedicated caricaturist would have been able to make a silk purse out of that sow’s ear), so I abandoned it.

I also saw the final Harry Potter movie today, and was pleasantly surprised by the appearance of a dragon in the movie. Without giving anything away (if I haven’t seen it until now, chances are that you might not have either) The Lady was excited for me over some of the events concerning said dragon, and I almost decided to draw that dragon (although in truth it was more of a wyvern or possibly a drake) but decided against it about a quarter of the way through and salvaged some of the preliminary construction lines to make this up as I went along: 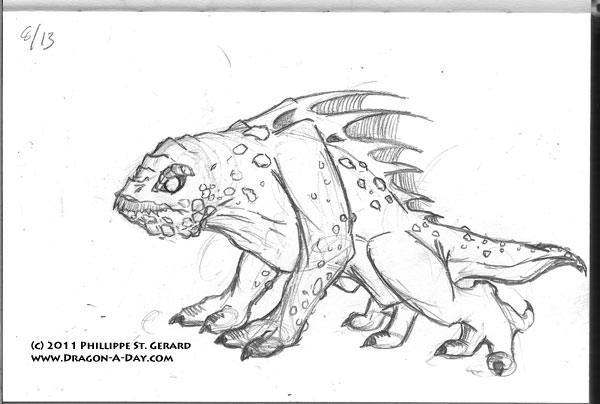 I’m not in love with the hind feet (I wanted to do something with overlarge dewclaws after seeing a dog with large sharp-looking ones on the street a few days back), mostly because of the toes; and I’ve gotten into the really bad habit of not “drawing through” the figure to do the upstage limbs before hand. I’ve no idea how I did, but I’ve really noticed that I’ve been doing that, and it’s annoying the hell out of me.

It bears a resemblance to the Rock Chewer dragon from two years or so ago, and I had to strive to avoid making it much more similar than it is now; I think I did okay.