(Edit: Took out some ranting about the WordPress Image Uploader failing, because it works in this new site).

With the Benthic dragons and merpeople blockading the Inland Sea out of protest over the war, the allied men and dwarves were forced to take the much longer overland route, which spread their forces out very thin, as well as slowed down their progress across the continent. After much consideration, they came up with a solution, of sorts. 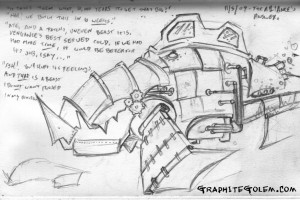 After initially proposing a solution, it was demanded that the problem-solving device be manufactured as soon as possible, despite the protests of the engineers, forgemasters and mages. It was so big, that they had to assemble it piece-by-piece in the water- on land, it would not have stood up to the demands of its own weight.

It was sentient, as the other mechanical dragons were, though it tended to brood more, perhaps because it knew it was a prototype, and felt the pressure of constant scrutiny.

Finally, when it was coaxed into the Inland Sea, it submerged…

I’m not entirely thrilled with it, as it looks like a fish, and only a fish, though I was trying to model it after the Benthic dragon, but make it a little more aggressive-looking, hence the heavier jaw with the ridiculous toothy bits in the front. There doesn’t seem to be a bit of dragon in there, and I’m not sure why. It seemed a lot better in my head. And I’m sure that it’s not reading right, but the open bits in the dorsal are water tanks for ballast. I also had some issues with scale- as it’s so huge, any rivets or portholes should probably not be visible… Bleh. I guess they can’t all be winners.

Since it’s so off, here is another dragon for this post- another dragon for one of the folk at draconity.org. Selroth has been trying to piece together his personal “catlike draconic mammal” for some time, and has commissioned me to help him put it together in small daily increments: 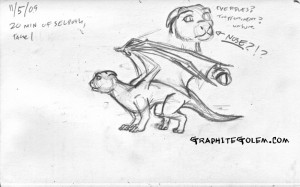 I’m not sure how well I did. I was really tired when I started it and there was a lot of description to keep up with- which is normally good, but I’m not sure if I processed it all correctly. There will be more anatomy studies of this fellow in the coming days, and of course, more dragons, and hopefully they won’t look like fish.

This entry was posted in Dragon-A-Day, Sketch and tagged draconity, mechanical, selroth, steampunk. Bookmark the permalink.