Dragon-A-Day Online: Day 783: So This Happened.

This evening, I found myself around Union Square, where I encountered this man: 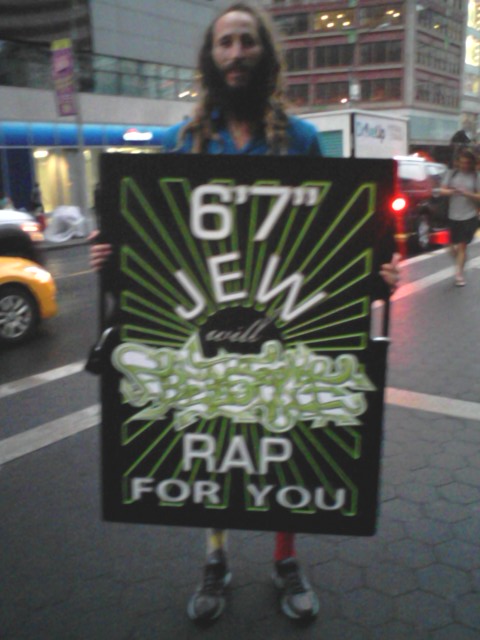 His name is Te’DeVan; he apparently had a bid for President last year.

My phone camera is not the best, so go visit his Tumblr for a better look at the sign (yeah, it says what you probably think it says; the blob in the middle reads “freestyle”).

Naturally, I stopped him and asked if he actually rapped. He does, and makes enough to get by.

I asked if I could get a picture of him, mostly because I figured my brother (among others) would get a kick out of it. He explained that he usually asks for donations for photos, which made perfect sense to me- licensing one’s image and all that, so I gave him $3. He then asked if “there’s anything you’re passionate about?” that he could drop some freestyle beats on.

I replied “Dragons” (naturally). He asked if there was anything that I could tell him about dragons that ordinary people might not know, so I told him about the history of the Western Dragon, and how we have since romanticized them away from their original poisonous/venomous natures (which I’ve written about in this space before).

And, true to his word, Te’DeVan kicked it. He sort of phased from rap to spoken word, but he went pretty continuously for close to 4 minutes, by my reckoning. I thankked him for his performance, and we chatted a bit more, then I left, thinking about the Dragons of Olde, the ones who despoiled the land simply by being in it or other things made all the more drastic for their incidental nature.

I probably would have written a lot more about that, but naturally when I came home, I plonked myself in front of the computer, and promptly got lost in idling about. Despite that, I did a pretty good sketch tonight: 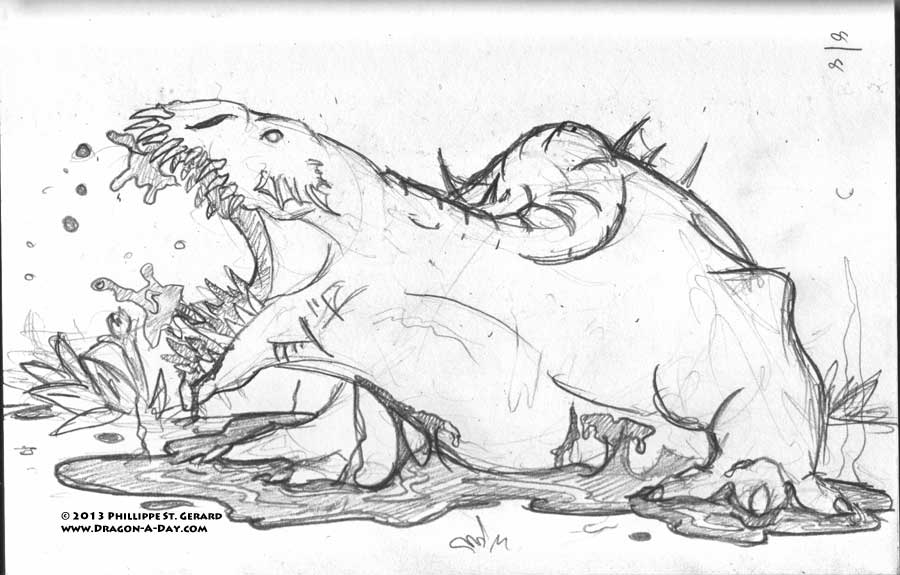 I found myself a bit at odds with whether or not to place fins on the dragon- its semi-aquatic nature would let me get away with it, but I kind of wanted it to be ungainly and almost ugly, terrible to behold, as opposed to the sleeker, graceful dragons of our modern-day folklore. I’m pretty happy with how the ichor/muck/putrefied landscape came out, though I also wasn’t sure about it exactly where it came from- at first, I thought he dragon might be exuding it, or have it dripping from its mouth or something, then halfway through, I think I just decided that its body would cause the effect, and it carried it wherever it went, some of it sticking as it waded along.

This entry was posted in Dragon-A-Day, Online, personal, Sketch and tagged legendary, lindworm. Bookmark the permalink.