I overcame a great deal of inertia and made food today. If that doesn’t interest you, click here, because I ramble about the three different things I made at great length.

For starters, I made brown rice with cilantro and lime:

Cook the rice as you normally would, except that you add the cilantro and lime in the initial boil. If I did this again soon (and I might), I would consider making a “tea” out of the cilantro, then straining it out, so that the rice would be more visually appealing (as opposed to having bits of cilantro all over the place), btu hopefully still have the cilantro flavor. This is purely a visual conceit, and ideally would have no bearing on the taste of the rice, which was pleasantly limey and cilantro-y, not unlike the rice I kind of remember that they serve at Chipoltle.

To go with, I made Some Sort of Bean Salad.

For the salad, you’ll need:

Dump everything into a large bowl, including the avocado pit (in the hopes of keeping the avocado from going brown and weird, I’ll let you know how that turns out) You could eat it as is, but it’s probably a bit plain. Therefore, I offer you this Salad Sauce:

When you add the lime juice to the oil, the juice will plummet to the bottom. It’s kind of cool. Add the rest of the stuff, then stir vigorously, making sure that the spices and stuff aren’t clumped up. Pour it liberally over the salad, then toss to coat. It will probably settle to the bottom, and the salt might leach some of the moisture out of the other foods, so you might want to wait until you’re about to serve before adding the stuff.

Finally, I made tofu by myself for the very first time. I didn’t have any idea of what I wanted to do with it; I just know that I’ve made the other two before and come away hungry and frustrated, and I can only assume that it was because there wasn’t enough protein in the meal, just tons of fiber. Therefore, I needed something, and since chicken was more expensive than I felt like dealing with, tofu got  the nod.

I had an ambitious idea in mind once I was in the kitchen; I decided to marinate my (extra-firm) tofu in Old El Paso Low Sodium Taco Seasoning (no, I don’t get paid for these product placements) cooked over a low flame with as much water as I would normally use, plus a bit of oil to try and bind it (as opposed to making just hot Taco Kool-Aid), then cook it in a skillet, as though I were browning meat for tacos, because you can allegedly cook tofu just like meat.

That last bit is a lie, by the way.

I marinated my tofu for a good half hour while the rice was cooking, then dropped it into the pan. I fidgeted with it, flicked the heat up and down, but all it did was steam a bit, which seemed more to be the marinade caramelizing or doing whatever it is that spices and sand do when they’ve been left on a medium-high flame too long than the tofu approaching anything resembling something other than “wet chunks of white stuff.” It never turned brown, never crisped, all it did was start sticking to the pan and crumbling a bit. Some Googling turned up the fact that tofu is already cooked in processing and it’s pretty much impossible to “undercook” it, so I took it off the fire before my pan was ruined.

Finally, I layered all the ingredients in the order presented and sat down to watch A Cat In Paris with a glass of raspberry lemonade. All in all, a satisfying evening, though the film was a bit lackluster.

*And here we are. I didn’t know what to draw; first I thought I would do something involving stubborn tofu, but nothing came to me, so I did this: 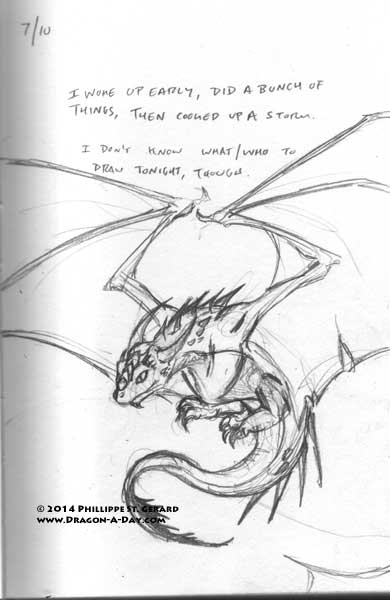 I really need to build a model or spend a lot of time staring at some figured, because that spread wing angle always seems to get me at inopportune moments- the right wing (on the left side) doesn’t line up properly, and I have no idea why that gave me such a problem.