It’s October 10th, and sometime readers of this blog will remember the significance of that date (which is why I skipped over the other 15 or so days of backlog to post right now), though admittedly with all that’s been going on around here (interestingly enough, that’s happened before), I very nearly forgot about it, especially since I kind of got stymied last year.

During a few moments of introspection today I came up with the idea that the storm, like Leviathan itself, is a humbler of mortals; something to pull out of the divine back pocket when humanity gets too uppity and starts asking uncomfortable questions and bludgeon the questioner into submission through sheer impressiveness, whether that be of simple scale or destructive force. I’m pretty sure I’ve made mention of the “shut up and look at this thing I made, because it’s way cooler than you” argument that God uses to smother Job’s indignation; I just don’t remember if I ever made it here before. Anyhow, I am now.

But even with this understanding, what to do with it?

My initial response was to draw Leviathan just being really big. The problem with that is that you can’t see the rest of him; just the part that we can take in because of how big it is. Essentially we are the blind men patting down the elephant. The image becomes visually interesting mainly because of the other things included for scale. Also, I’ve pretty much done that anyway, though I suppose I could update it.

In the end, I just plain bit off more than I could chew: 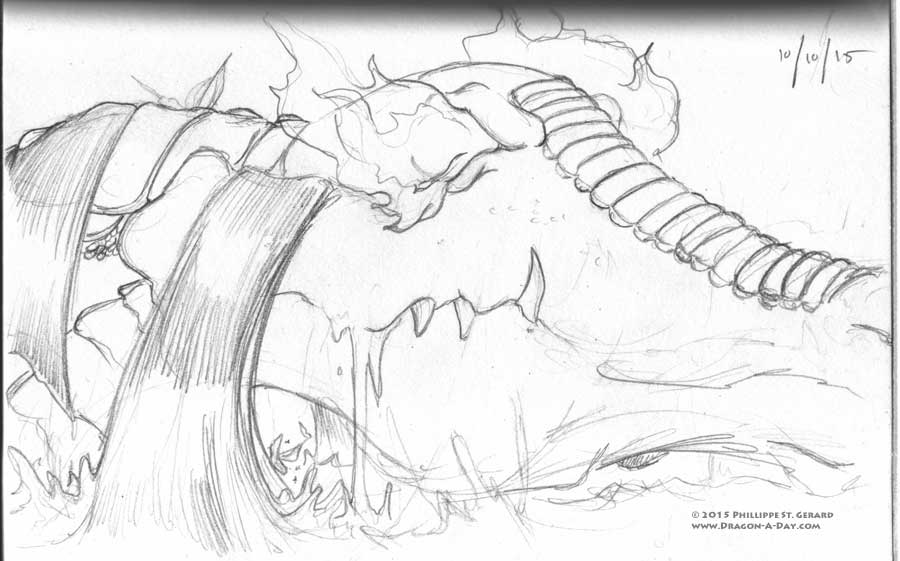 Water streaming off of him seemed to be important, though at first his whole head would have been covered in streaming water, which seemed dumb. Then I realized that all the niggling little details of his face should be in stark relief, and honestly I didn’t know what they would be, or if I would end up covering them with water, splashes or hapless seacraft. In the end, I’m pretty sure I underperformed this year, and I’m not thrilled about it- I got so wound up in my introspection that I didn’t have the energy to devote to the piece, which annoys me.

This entry was posted in Dragon-A-Day, Online, philosophy, Sketch and tagged dragon, Leviathan. Bookmark the permalink.