So I think I’ve done all that I can do with the piece that I’ve been working on the last few Sundays- going forward, I shall work with cleaner lines, if I start with a sketch- the sketchiness of the original artwork didn’t help me that much, because I tend to get OCD about clean lines and colors, whereas the smudges, faint pencil lines, etc added texture to it, which, while nice, was distracting. 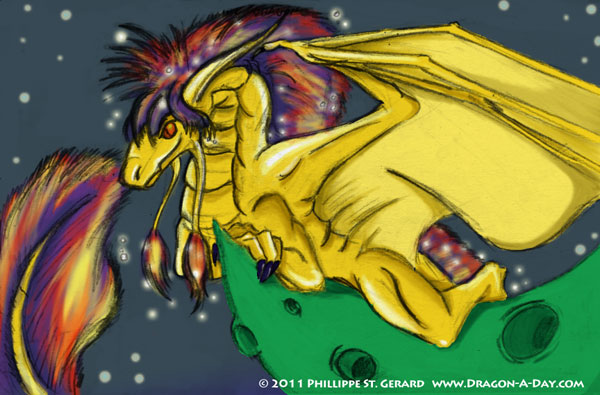 My paint-fu is still not as strong as I would like; that’ the whole purpose of this exercise. However, I’m starting to feel like I’m fighting a brick wall with my forehead, so I need to change my tack and try something a little less demanding.

Tonight’s post also features another dragon from my draconity queue. 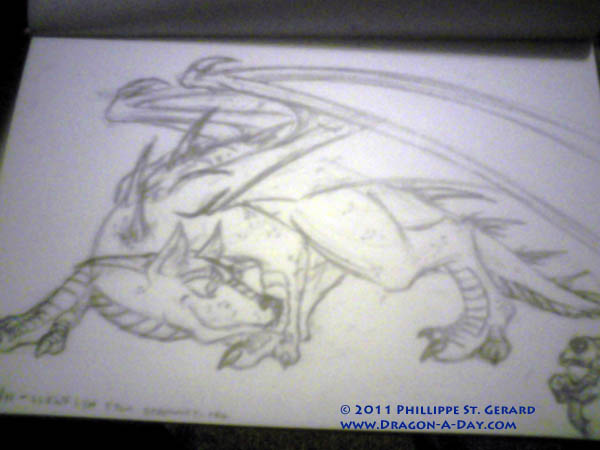 This is Llewelyn (and a Squirrel dragon). He writes:

Style (Eastern, Western, Anthro, ophidian, other): Western
Relative size and build: Uh, typical Western?
Horns (number, style, curvature, relative length): 2 horns behind the ears, parallel with the top of the head, that curve just slightly as they extend back to points. Lengthwise, perhaps 1/2-2/3 the length of the head in comparision?
wings (include number of wing-fingers, if possible): Yup, “standard issue” wings
Accouterments (back spikes, head frills, beard): Fluffy tailpoof at the end of the tail. Also some floof-ish manelike that starts between the horns and runs back along the entirety of the spine, ending near the end of the tail.
Any other distinguishing features (scars, funny hats, surprise me): Has fox-like ears rather than earfins or nothing.  Head and muzzle should have a canine/Eastern cast to it, with a black nosepad at the end.
Demeanor or common activities: Playful draggie of randomness

There was some confusion about the floof. I’m pretty sure that I didn’t get it right, but he didn’t really know how it was supposed to look, so I guess we’re even. I might not have gotten the horns right, either- I got a little confused between his description and looking at some references that he’d provided that were supposed to have the horns done right. On the whole, I’m happy with it, and I hope that Llewelyn is too (although I will have to send him a better cdopy once I get back to my scanner.)

By the time that this goes live, it’ll be my birthday. I’ll see you then.

Edit: Gah! That phot was terrible! Here’s an update with a scan: 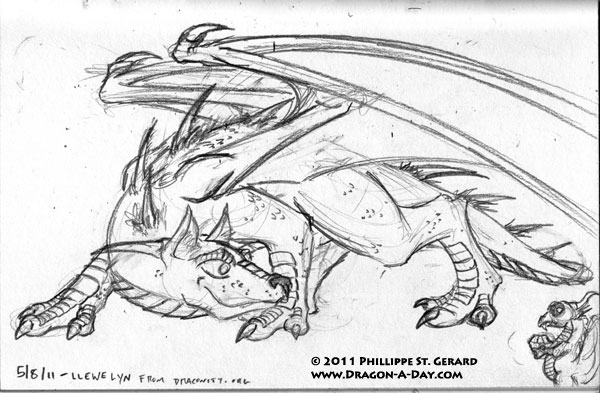 This entry was posted in Sketch, Speedpaint Sunday and tagged draconity, squirrel, technique. Bookmark the permalink.