As a sort of experiment, I’m typing this out as I work on it.

I saw the Starcraft 2: Heart of the Swarm preview stuff today. I’m excited. Without getting too much into gaming jargon that many of you will not care about, the Zerg have always been my favorite race in the game, and I’m hoping  (but not expecting) that they will no longer be  so terrible in SC2.

Now I feel compelled to clarify that a little. In Starcraft, there are 3 races. The humans, the noble aliens and the evil aliens. the Zerg are the evil crazy bug-aliens. They are similar to the xenomorphs in later Alien movies (or maybe the Bugs in Starship Troopers, probably a bit of both)- they are living biological weapons, they can “infest” other living creatures and transform them into new creatures with similar physiology to other members of the Swarm (that is, they turn them into partially insectile versions of their former selves).

I had first wanted to draw an infested dragon of some kind, but as I thought about it, the idea seemed less appealing. Then, I had the bright idea to draw one of my dragons fighting the very impressive, (and equally ineffective) ultralisk.

The dragon that I chose to work with was the War Dragon (as I had been kind of jonesing to draw one for awhile and had kept putting it off), but when I tried to pose it, it just never worked. 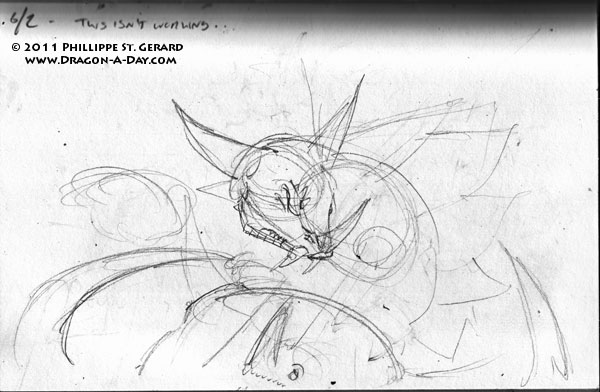 The Rule of Cool (or more accurately, its aftershocks) reared its ugly head and prevented me from doing what I wanted to do, because the dragon (or really, its impressive, but truly unwieldy dorsal armor) couldn’t do very much aside from stand still. Its neck is too short, and its horns too long for it to turn and look at anything, much less lean over and bite/breathe fire/look awesome, which was also a problem.

So I tried to redesign it. I’m warning you now: I did not succeed.  Here is a comparison: 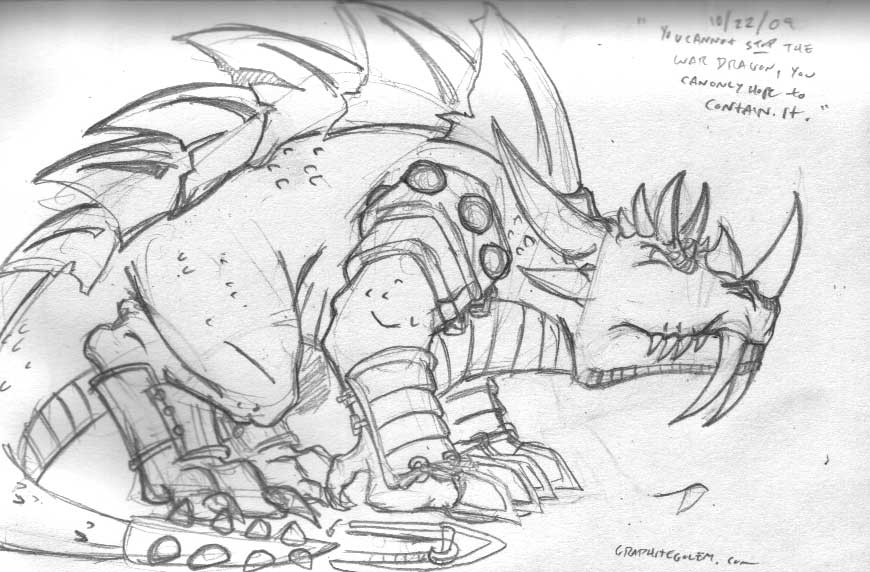 Obviously, the high dorsal crest makes the profile, even if it is the root of the problem. The assorted headgear is also nice, but needs to be fixed. I thought of using a horned lizard for a reference (and may still go back to that), but at this point, I was too annoyed and wrung out to do anything much aside from fumble my way through it. After trying to draw this dragon without drawing this dragon for more than an hour, I came up with this: 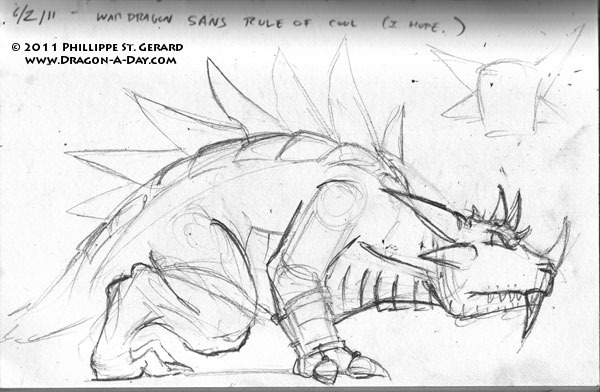 I got hung up on the crest and the profile- how to keep it while actually making the dragon flexible enough to do… well, anything that didn’t involve a straight line was beyond me. Then the horn question came up. Lengthening the neck also changed the profile in ways that I did not like…

Basically, I’ve been married to the look and feel of this dragon for more than a year and a half, and I couldn’t get past myself to fix things that I should have realized were not going to work from a design perspective in the first place. I was thinking that I might go back and try to “fix” this later, but doing so would take away so much of the spirit of the heavyweight, plated-and-horned War Dragon that I don’t nkow if I can kill that particular darlilng, and will have to learn to live with it.