Those of you who know me in real life have probably heard about my wrestling with the human face and life drawing in general. Lately I’ve been noticing that I seem to draw differently when I’m really trying to draw a human being, my sketches kind of tighten up and get, well, weird.

I mean they’re more-or-less anatomically accurate and all that good aesthetic jazz, but they kind of feel like they were done by someone else. They seem to lack that… joie de vivre that so many of my other drawings seem to have innately, and that kind of bothers me.

I realized this while doing some concept sketching for a personal project that I’ve been putting off that will require an entirely-human cast (yeah, I know, what’s the matter with me?), and just feeling stuck. Then I started making myself draw another way, relaxing more and not trying as hard to get it “right,” and they started looking a little more like what I wanted. There’s still a long way to go, especially if I am going to have to “retrain” myself to let myself actually draw in my style (because that makes so much sense), but at least I’m a little more aware of the problem. I’ve been thinking of integrating it into this space so that I have to work on it, but for now I’ll see if I can keep working on it in a vacuum.

Anyhow, while mulling that knotty problem over, I thought about the different styles of dragon art I’ve been doing (most clearly illustrated here), and that led to this: 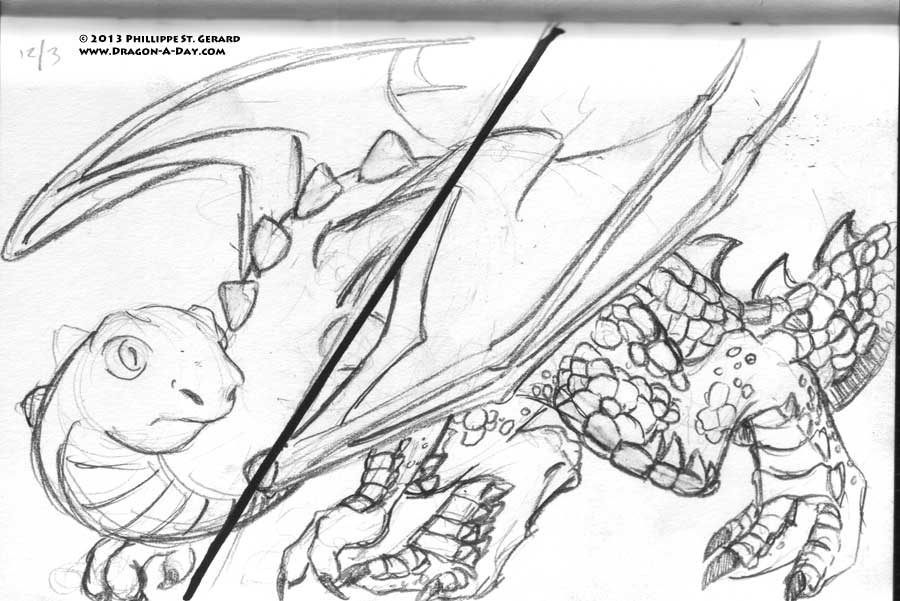 I kind of feel like the split could have been done a little better, and in fact, this was an idea that I was wrestling with through the first few weeks of my Directory of Illustration journey, except that the dragon would have been fighting a mounted knight who would have gotten a similar treatment, and the “cutesy/cartoony” side would have been more so.

Oddly enough, I never feel like I have to try as hard to do either when I’m chasing the dragon; it just comes naturally. Always has. But when it comes to a human being, I get freaked out by uncanny valley or something and just end up making Bad Drawings™.

Anyways, I’ll leave you with that and get out of here for tonight.