So whilst going through my D&D books deciding what to keep and what to give away before I move, I found Dragons of Eberron. I had a love/hate relationship with the book, as it provides very little “crunchy” game material, instead doing a lot of “fluffy” world-building that’s extremely world-specific. Nevertheless, I decided to try reading it one more time to see if I wanted to schlepp it some 300 miles to sit on a shelf and probably not do anything.

After further observation, my initial review is still accurate, but I came away feeling like a lot of the Eberron-specific geography and some of the history could be stripped away for ease of use and some of t he fluff could be massaged into something world-agnostic. At the very least, it talks about ways to work dragons into your game aside from bags of hit points and treasure.

There’s a brief list of dragon encounters for the continent of Khorvaire, the mainland in the setting, and one of them is basically a white dragon who survived the magical equivalent of Hiroshima, and got mutated and crazy because of it (the effects of the Mourning seem to not let him heal or even let those killed in the blast decay). He’s referred to as “Haze-of-Death,” and I decided to try to draw him on a whim because I didn’t know what else to do: 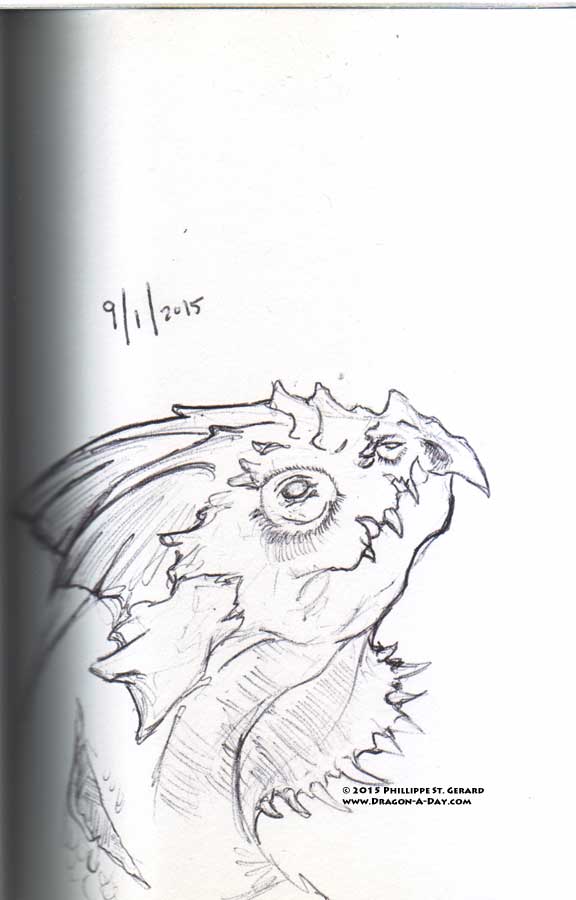 If I had set out specifically to draw him, I would have probably made him a bit more deviated from the typical white dragon, but since I did this with no references, I probably ended up doing that anyhow. Maybe I’ll try again, paying more attention to the description in the book as well- I just remembered that he has a lot of bloodless gashes in his hide and he has horns/plates that a white dragon does not normally have on his head.