Remember when I said that I might be without Internet for the next few days? Well, I was.

One of The Lady’s best friends got married over the weekend at this tiny little chapel in the Middle of Nowhere. It was described as a “short walk through the woods” from the chapel.

In my professional opinion, this description was not entirely accurate.

Since The Lady was in the wedding, we went to the rehearsal the day before, parked in front of the reception hall (after driving 5 miles down a road that was more gravel than anything else, and so far in The Woods, it probably wouldn’t have surprised us if a Disney Princess skipped out of a thicket right into the path of the car), rehearsed, and somehow ended up being the only people walking back to the hall.

It’s surprising how quickly featureless woods all run into each other when you’re trying to retrace your steps. If only we had tried bread crumbs. 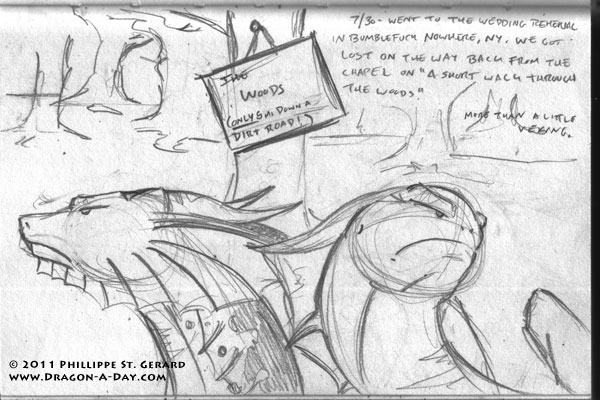 Anyhow, we promptly got lost and annoyed at the distinct lack of signage. There wasn’t even anything on the way in– if it hadn’t been for one of the staff coming out to water the flowers outside the hall, we probably never would have found what passes for a path to the chapel in the first place.

Obviously, we made it out alive and relatively unharmed, but this chain of oversights will probably stick in my craw for years to come.

This entry was posted in Dragon-A-Day, Online, personal, Sketch and tagged Holiday, my dragon, The Lady, wedding. Bookmark the permalink.