Well, after the whirlwind pace of the last few days, you’d almost think that going back to the daily grind of doing stuff for other stuff would be a welcome change.

Without getting into the minutiae of my workday, I found myself at my table without any inspiration and a probably unhealthy dose of fatigue. So I consulted the faithful Random Word Generator, and fiddled with the settings a bit, changing the word settings to “Obscure Noun.”

A few words like “Deafmuteness” later, the Random Word Generator coughed up… “Wisconsin.” So I did this: 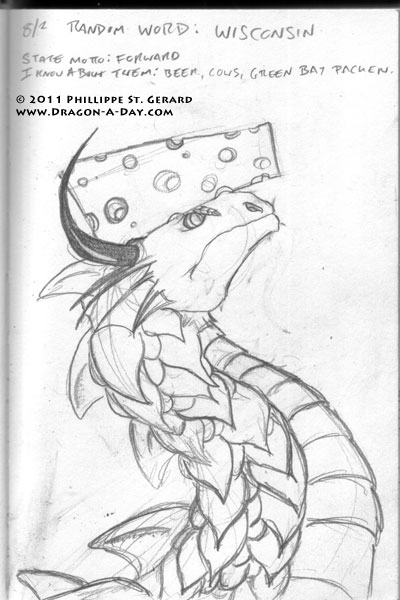 The scales on its neck are supposed to be reminiscent of the leaves of the hop cone. The horns are probably a bit too long to be quite reminiscent of a cow’s, but the cheesehead pretty much speaks for itself.

I do like the idea of a State Dragon, though, and I will probably revisit this idea sooner than later. Now I need to go to bed.