In Dungeons and Dragons version 3.5, “Exalted” (in layman’s terms) means “really, really good. Like holier than thou, thou, and even thou.”

So I was a little surprised when someone mentioned that last night’s dragon looked like it might be an Exalted Dragon.

No, not this one, though that’s what I thought at first too.

Anyhow, I thought that that was kind of a neat idea, so I fleshed him out a little bit: 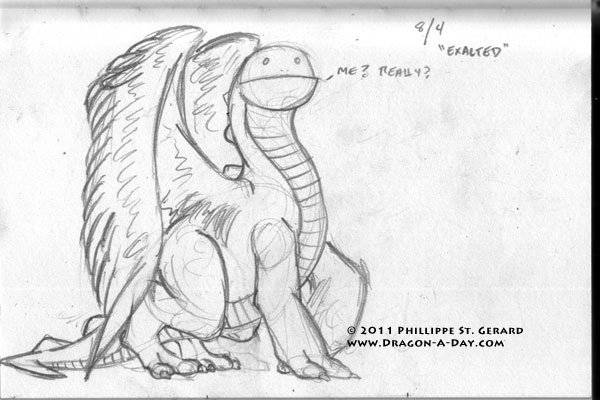 At first I thought of giving him stumpy, sauropod-like straight-up-and-down legs, but that looked clumsy, un-dragonish and not dignified enough to be Exalted. The Canadian-style head made sense, considering the beady eyes and mild underbite of yesterday’s post, so I ran with it. I especially like the heavy forearms (though I’m not sure why) and almost complete lack of other draconic accoutrements, like horns or heavy scales.

That’s it for tonight.

PS: I just remembered that it’s the first day of Gencon, and I am not there. I’m a little wistful about not being there and rubbing elbows with the gaming community, but I have several hundred extra dollars in my pocket and significantly less stress this summer as a result, so I guess it’s a draw.