After reading partway through a big ol’ color theory tutorial that I found on DeviantART (and failed to save), I felt partially inspired to do this: 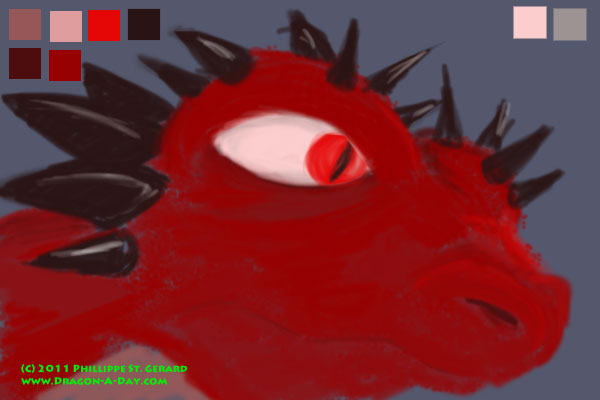 The tutorial explained how “monochromatic” (or a very similar word) encompassed all the colors in the Color Picker, I decided to give it a try. I’m pretty happy with how this came out; I tried to avoid pure white as well as the 255, 0, 0 red, and blended colors when I could, although I’ll admit that I lost my patience in places and hopped from point to point on the dragon’s face, because I couldn’t quite get the coloring effect that I wanted without having to constantly flick between settings on the Paintbrush, which became annoying pretty quickly.

I also didn’t start out with the greatest sketch (which resulted in my wrestling with the eyes more than I would have liked), although I did do a sketch this time as a base- blotches of color were becoming too intimidating, along with possessing minds of their own.

The Scatter Brush created an interesting, but somewhat distracting texture on the piece, which I guess I could use after laying down flat colors in the future.

I don’t know if I will try working on this some more or if I’ll try to find the tutorial again and apply what got me going, but I think that it’s a step in the right direction.

This entry was posted in Speedpaint Sunday and tagged monochromatic, technique. Bookmark the permalink.