So apparently, Labor Day marks the beginning of the Presidential campaigning season, at least here in the good ol’ US of A, or so the News tells us.

With that on my mind, I realized that that State Dragon quasi-project I had come up with had fallen behind. Those of you old enough to remember three elections ago will understand why I picked the state that I did, though the execution’s not quite there, I think: 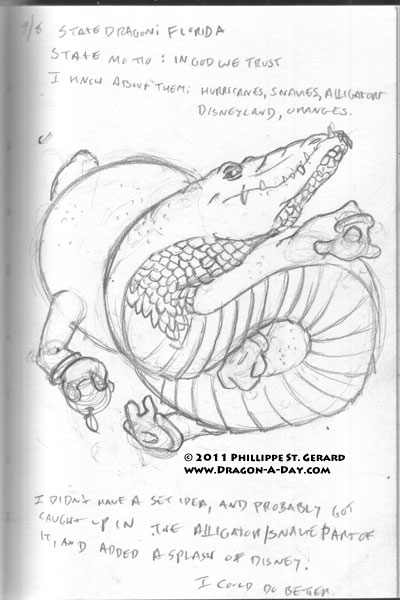 Things like the Miami Hurricanes and the eastern dragons’ influence over storm and weather (which reminds me, I never did try to do a Hurricane Dragon) kept meandering through my head, so I just kind of ran with the idea. I wasn’t sure what to do with the alligatorish neck scales, and it kind of shows.

I do like the idea of a dragon with old-timey Disneyesque gloves on its hands, though.

This entry was posted in Dragon-A-Day, Online, Sketch and tagged Florida, State Dragon. Bookmark the permalink.