For those of you who didn’t know, I’ve had an on-again, off-again love affair with the show Deadliest Warrior on SpikeTV. Tonight was their season finale, a double-deckered misnomer billed as a live event (it was really a pre-taped event featuring some live bumpers and a live post-game) with the highlight of (infected, modern-day/World War Z type) Zombies versus (30 Days of Night) Vampires.

This was a Big To-Do because the show has featured only real-world combatants for its three seasons up until now.

Anyhoo, after listening to the “experts” describe their chosen faction, I did this: 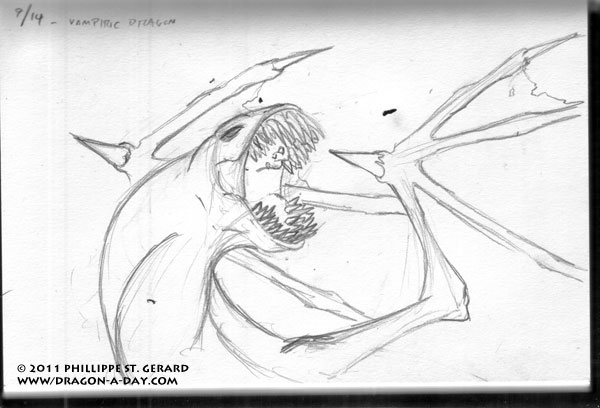 I could have done a Zombie Dragon as well, but I don’t like zombies, and I probably never will. Plus, the Vampire team talked a much better game, though I’m not really a fan of the bestial, serrated-jawed, razor-clawed, thudding-hwarted (that’s how I’m rationalizing that the zombies were able to hear them/feel motivated to attack them) vampires that were in the show.