So at another Meeting that Wouldn’t End, I was relieved of my minute-taking responsibilities and largely left to my own devices.

So naturally, I spent most of the time drawing. First, I decided to tackle that background-eating dragon from yesterday: 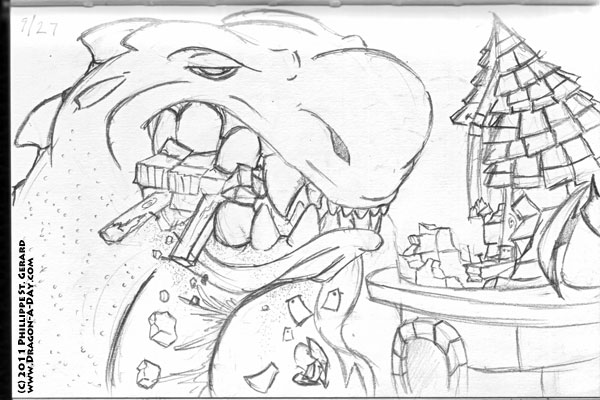 “You’ll wear down your teeth grinding this stuff, so you… swallow it in chunks! Wiggle ’em around with the gemstones until they’re pulverized.”
-Smrgol, from the Flight of Dragons, lecturing Peter Dickinson on the use of one’s craw.

I really like this one. I probably could have thought the tower out a bit more, and if I had it to do over again, I’d probably have made the tower leaning or something, not just having had a chunk taken out of the top. The dragon’s big, slightly-pointed teeth seem just as good for crushing masonry as they might be as weapons, and I especially like that I managed to fit the pennon dangling from the corner of his mouth.

Thus emboldened, I continued to while the time away with another suggestion that The Claw had made, the idea of a dragon playing Magic: the Gathering. This one probably won’t make as much sense if you’re not familiar with gamer culture. 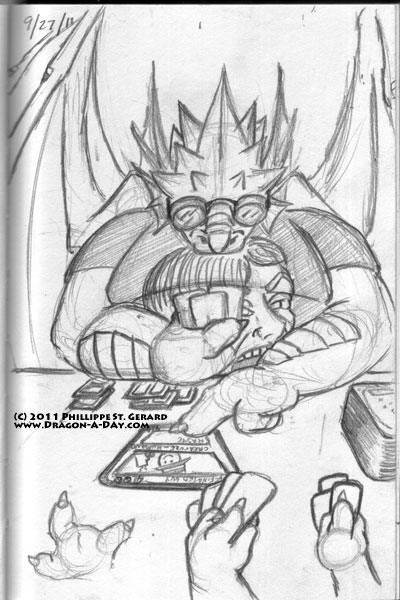 First off, I’d like to point out that I had no references for card shapes and that the perspective is probably leaving something to be desired in this. Oh, and the hand anatomy is probably not strong in this one, either.

At any rate, the short explanation for what’s going on here is that I drew a draconic fatbeard (complete with black t-shirt depicting an angry human, because in Bizzaro World, humans are mythical creatures) playing a card called “Caffeinated Guy,” a red creature with haste. I probably should have drawn the human head before anything else, but I only thought of it as I was finishing the piece.

Last, but not least, I did this quickie as we were (finally!) wrapping up: 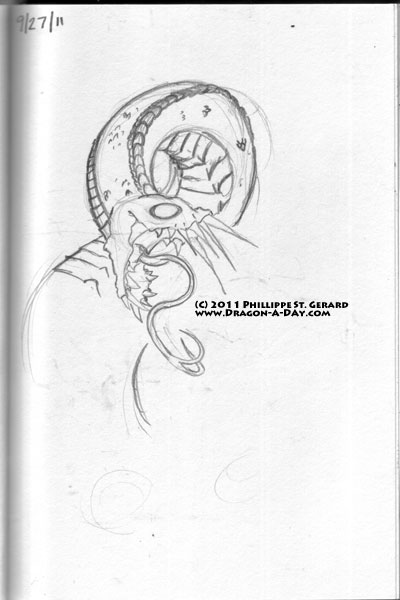 There’s no real reasoning behind this one aside from the fact that I was trying to kill time, but I wanted to share it with you all out there in Internet land. That’s all.