Like I said yesterday, I realized that I never posted those “10 days of Leviathan” sketches I did last year, so here they are: 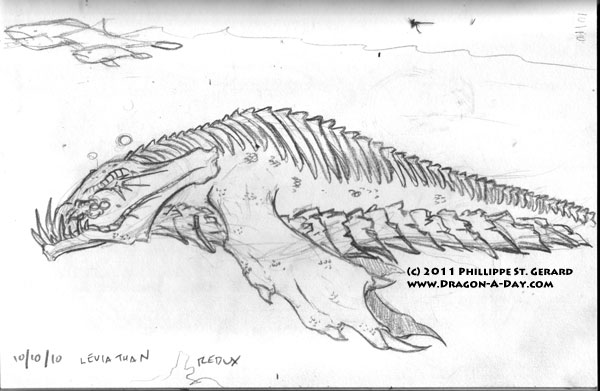 Based on the sketch I did in 2009 with a few tweaks. I wasn’t quite happy with it. Turns out that I’d have more chances to refine it. The biblical references made him out to be snakier than I had him, so I gave it another shot: 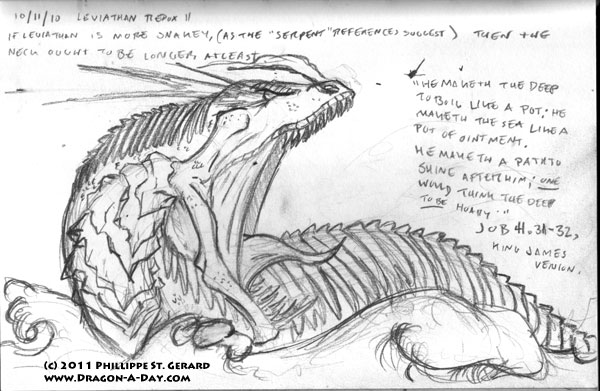 So far so good. The Bible also describes him as breathing fire. 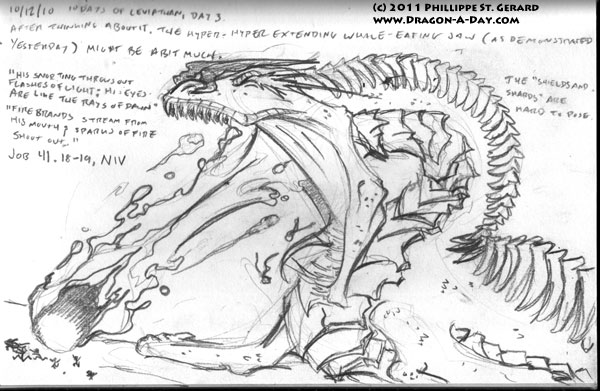 “His snorting throws out flashes of light; his eyes are like the rays of dawn. Firebrands stream from his mouth; sparks of fire shoot out.”
-Job 41. 18-19; NIV 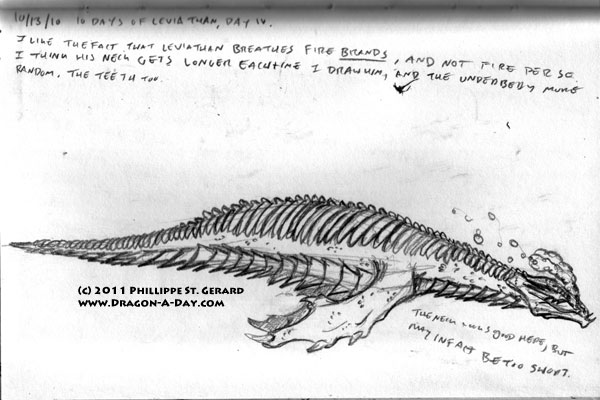 The tricky thing about drawing creatures with proportions like this (see the Threadshrike, for example) is that you quickly run out of page unless the drawing is very small (the sketchbooks I work in are only 4″x6″). The overgrown vertebrae of dorsal shields might be limiting Leviathan’s flexibility. 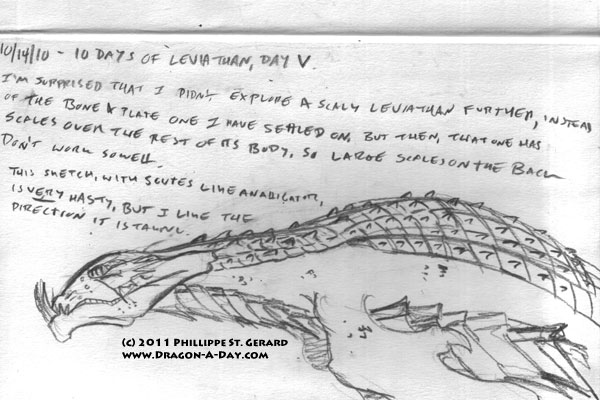 Like I mentioned in the notes, it is surprising that I didn’t explore a scaly Leviathan further (on the subject of scaly creatures, a few weeks ago, I recall seeing someone saying online that Stegosaurus was mentioned in The Bible, and they used God’s description of Leviathan- the same quotes that I’ve been referencing, as proof), so in order to differentiate them from the “watertight shields” on the creature’s back, I replaced the vertebrae with alligator-esque scutes. Seems to be working. 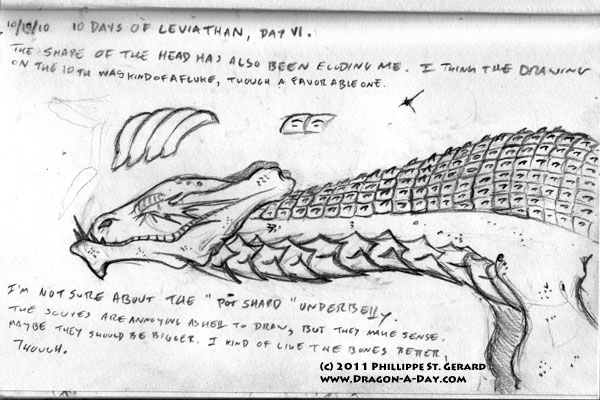 The scutes were working, nut the rows and rows of them are kind of annoying to draw. Tried to standardize the head and teeth a little bit, too. The “jagged potsherds” of the underbelly aren’t quite there yet, though I’m not sure what to do with them. 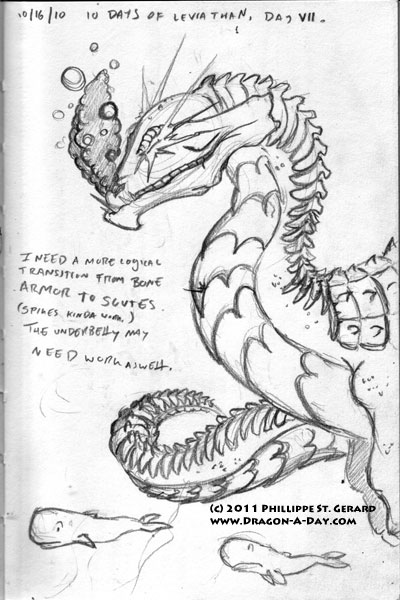 At this point, I made kind of a scute sandwich on bone armor bread. Not sure why I did that, especially without any sort of logical transition- looking at it a year later, if I’d shaped the scutes like the armor at first, it might have made more sense. Ah well. 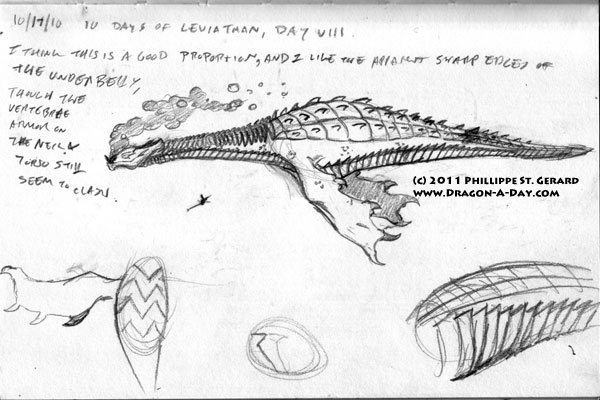 Continuity within the creature’s textures still seems to be an issue, though I like how the proportions of it are shaping up. 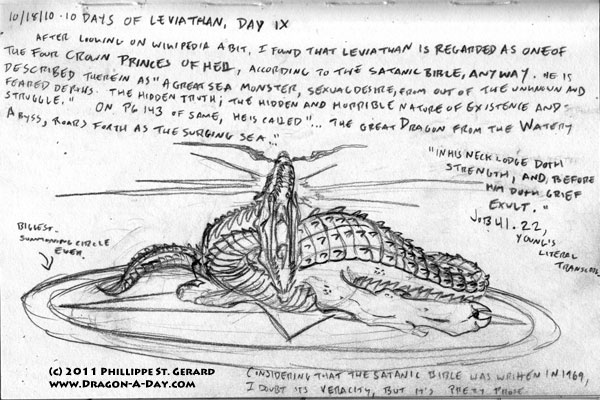 “In his neck lodge doth strength, and before him doth grief exult.”
-Job 41.22; Young’s Literal Translation.

Instead of exploring the design of it, I went Wikipedia-ing for inspiration. I found that Leviathan is regarded as one of the four Crown Princes of Hell, according to the Satanic Bible. Since the Satanic Bible was written in 1969, I am led to doubt its veracity, but it’s a pretty bit of prose, as well as an interesting one to draw inspiration from. 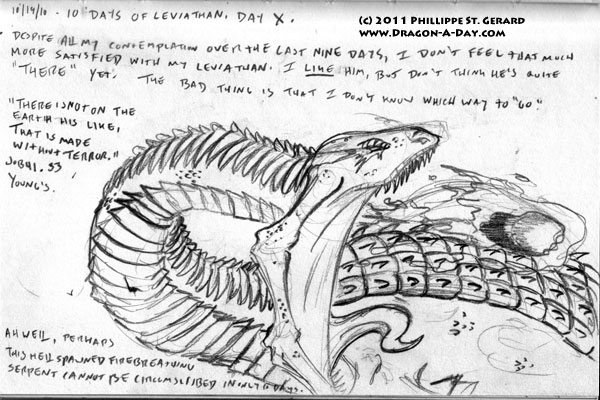 “There is not on the earth his like, that is made without terror.”
-Job 41.33, Young’s Literal Translation.

At the end of the 10 days, I wasn’t quite satisfied with the design, and I don’t know what to do. Like the notes say, it’s altogether possible that Leviathan cannot be created in 10 days, unless you’re the Man on the Fifth Floor of this four-story building that we call Life. Nevertheless, I like this, and while I didn’t reference these to do yesterday’s sketch (although I should have)

This entry was posted in Dragon-A-Day, Fan Art, Online, Sketch and tagged legendary, Leviathan, The Bible. Bookmark the permalink.