So the same person who set me on that Scottish dragon quest a few weeks ago (she’s a co-worker of mine) came up to me and said that the Scottish have a dragon on their flag.

They don’t. At one point they had a lion, but now it’s just a white cross on a blue field. So we looked for Celtic flags, which turned up a large number of visually interesting things, but no dragons. Finally, we Googled “Welsh Flag.”

And that was when I decided that I should move to Wales (Bhutan was a close second), because their flag is so much awesomer than ours. The story of Y Ddraig Goch, or “the red dragon,” is about an epic fight between two dragons, the red (the hometown hero) and an invading white dragon, and the resulting conflict causes “women to miscarry, animals to perish and plants to become barren,” because the red is crying out in pain.

That’s awesome! I mean, it’s surprising that the red is in such pain, but still, that’s a pretty epic battle there.

So naturally, i had to try and reinterpret Y Ddraig Goch tonight. Because of the way that he is depicted, I knd of decided to tackle him piecemeal- similar pre-perspective reference material has left me more than a little vexed and I’m not in the mood for such frustration at the moment: 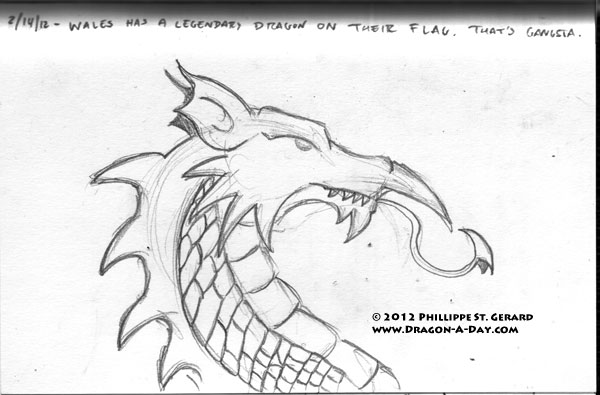 He came out a little more wolfish than I wanted, but I think the ears helped that more than anything, although the cheek spikes (bristles?) also add to that resemblance. This isn’t the end of this exercise, but it’s been a long day and on top of that, this isn’t really something that you can tackle all at once.

PS: for those of you wondering about the in-art caption, this song has been running through my head for the last few weeks.