I’ve been chewing my way through the stack of books I borrowed a few weeks back. I’ve found that one of the hardest things about being a trained artist picking up one of these things is the letting go of the years of training and habit that one has acquired in order to process the information in the book properly.

In short: they have a book; you probably don’t, and if nothing else, you picked up the book and may as well get something out of it. This isn’t excusing poor descriptions or uses of shorthand or jargon, but it’s easier to digest a well-described set of directions and/or advice if you’re not resentful of it.

That having been said, a surprising diamond in the rough turned out to be How to Draw and Paint Dragons: A Complete Course Built Around These Legendary Beasts, by Tom Kidd. I’m still not sure why I picked up this one, but I’d glad that I did.

I’ve only gotten about halfway through it, and honestly, it’s something of a pleasure to read, even for someone as long-acquainted with the subject matter as me. I haven’t gotten to the parts primarily about painting yet; only anatomy and I’ve enjoyed it the whole way. Kidd’s writing has a friendly, yet well-informed enthusiasm that makes it easy to pick up and run alongside.

There was a part about the multitudinous variations in dragonkind (and the resulting artistic freedoms that this engenders) that inspired this drawing, but half an hour of skimming the book later and I still haven’t found it. Basically, I wanted to do something incongruous and see if it worked- a sort of Australian medley of dragon parts. If I can find it and remember to do it, I’ll update this post with it; it really speaks to the “what makes a dragon” quandary I’ve been wrestling with: 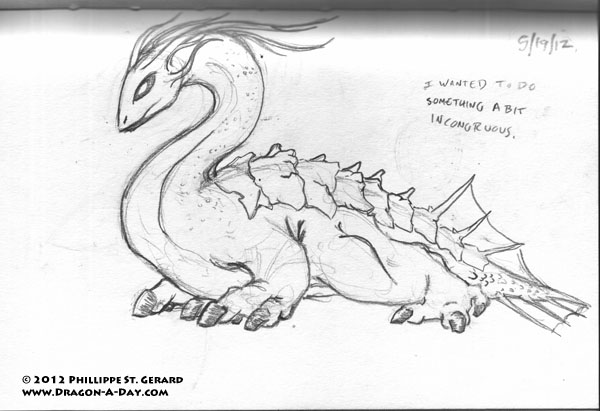 I probably could have pushed it farther with texture and so on, but I kind of wanted the disparate parts to look like they actually belonged on the same dragon, and not that it had been cobbled from a collection of bits with better-than-Frankenstinian stitching.

This entry was posted in anatomy, Dragon-A-Day, Online, Sketch and tagged what makes a dragon. Bookmark the permalink.