The last two days were somewhat uneventful until we were settling in for the night, and shared our fire with another traveler heading in the opposite direction. He came from the lowlands far to the south, and after I explained what I was doing, he shared some tales with me about dragons in the southlands.

Apparently there are some heavy-bodied, short-limbed dragons that gather in groups around the waterholes down there; from time to time they engage in impressive displays of strength, charging at each other and clashing their massive bony crests against each other in the manner of some sheep. From his descriptions and remembered accounts of others (he had never encountered them aside from at a distance), they have the temperament of the fabled rhinoceros, poor vision and highly territorial, but he was not sure if they speak- people down there tended to avoid them, and I cannot say that I am surprised; dragons of any stripe are oft-maligned, and these, with their apparently aggressive disposition would be more than most.

I did manage to piece together a sketch based on his descriptions; perhaps we shall make a sojourn to the lowlands to see if I have put it together correctly: 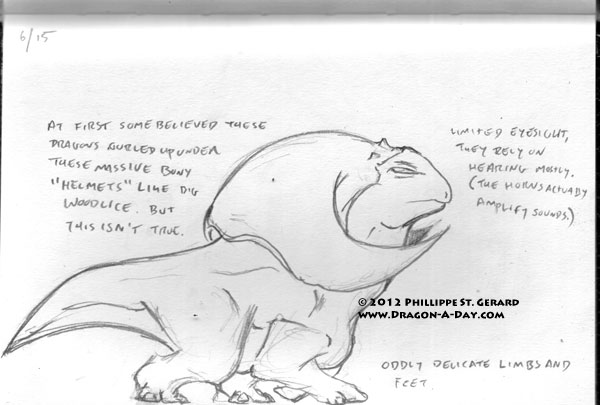 I am thinking that the feet and hindlegs will be a bit larger in person, but our companion insisted that they were so dainty. The world is filled with mystery.

This entry was posted in Dragon-A-Day, Field Guide, Online, Sketch and tagged bighorn. Bookmark the permalink.