Thinking about the hoarding from yesterday led me to ponder some of the other things that dragons do, namely, kidnap princesses. Many have written about the subject, and the motivations are as numerous as the dragons who go seeking damsels, or have them thrust upon themselves.

Hell, even I’ve taken a stab at this curious symbiotic relationship between wyrm and woman, and I still don’t really get it. Is it because the children of the king are inherently more valuable, and that makes them worth hoarding, like gems and gold? Is it because of the dragon’s inherent destructive nature, and devouring a virgin, of noble blood or no, is something tantamount to despoiling farmland, only more so, because of the despair that such a highly visible kidnapping/murder leaves in its wake?

Or is it something as simple as that the dragons are lonesome, they want someone to spend time with them, and draconic vanity demands that they keep company with someone of a high station?

I don’t know either. But it’s fun to consider it. 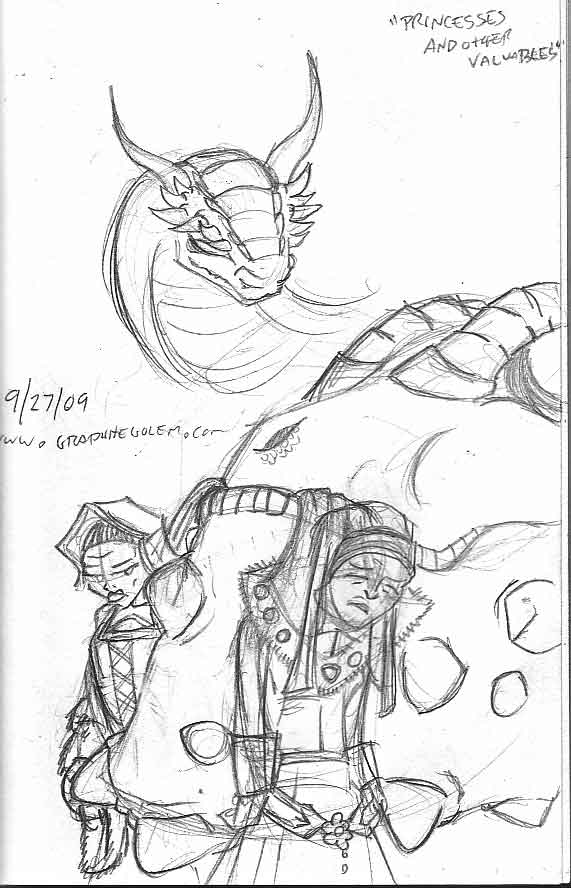 I don’t think that the Macejaw gets this big, but it’s been on my mind, and I needed a sketch for today. The girls’ costumes are cobbled together from Costume: 1066-1990s, by John Peacock; a book I stumbled over at the library and have fallen in love with. It’s not the greatest, but it’s got a wealth of stylistic illustrations for when my mind blanks on how clothes look.

This entry was posted in Dragon-A-Day, Sketch and tagged hoarding, macejaw, princess, what makes a dragon. Bookmark the permalink.