As we finish the second week of the Dragon-A-Day, um…

Well, whatever it is, I went and did something that I’m surprised I never did before: I looked at references. When I say that, I don’t mean that I looked through nature books for pictures of alligators or exotic lizards, I mean that I picked up one of the many open-mouthed figures that are sitting regally in my room, and looked at it while doing some drawing for something due this week.

The most helpful figure (for eye positions and muzzles, anyway) was a two-headed dragon I picked up at Gencon a few years ago. I wish I knew what the figure was; I’ve seen it at the Met and in other places, but I’m too tired to dig out my camera and take a picture of it; maybe for tomorrow’s post.

Anyhow, here’s a crapload of sketches from my attempts to wrangle full-on heads again. 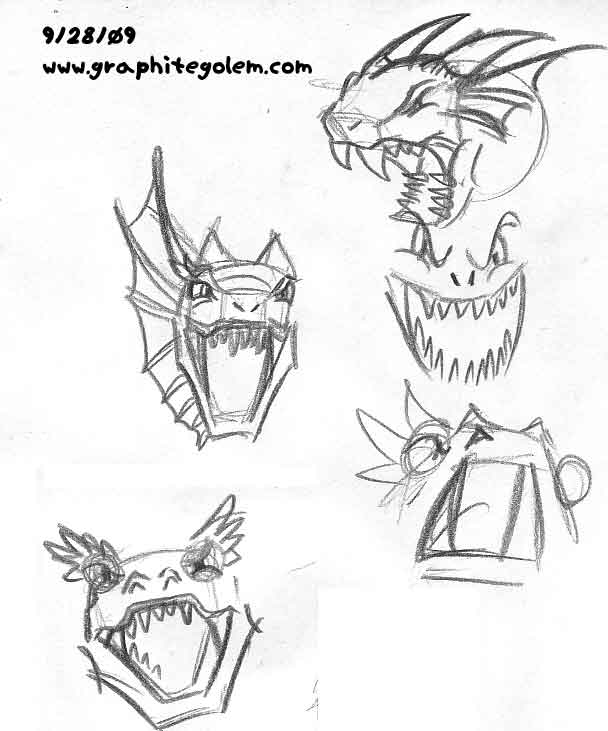 My primary concern was that they kept coming out looking like the dragon was smiling at you. I’m pretty sure it was the eyes… 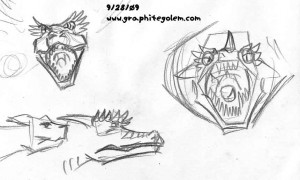 Which was what led to me looking at figures in the first place. The top left head and the one that resembles it, with the ridged snout were based off of the two-headed dragon figure. It was very interesting to note that the eyes and horns sat on a sort of shelf above the muzzle, which is very different from the wedge-shaped heads that I typically draw. The blockier heads in this one came along after looking at my Gargantuan Blue Dragon figure, because I knew that that figure has a head shape that more resembles what I normally draw, and Todd Lockwood seems to make it work in Draconomicon, though not from the front, now that I’m thinking about it. 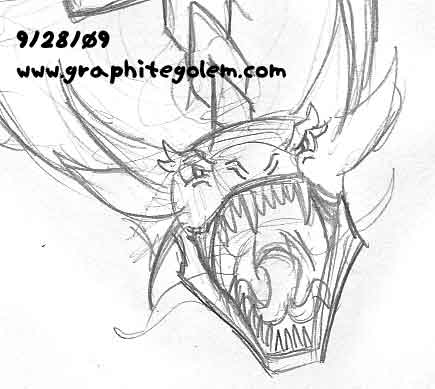 I was rather happy with this head, but there was nowhere to put a neck. Damn you, foreshortening. Will we never be friends? 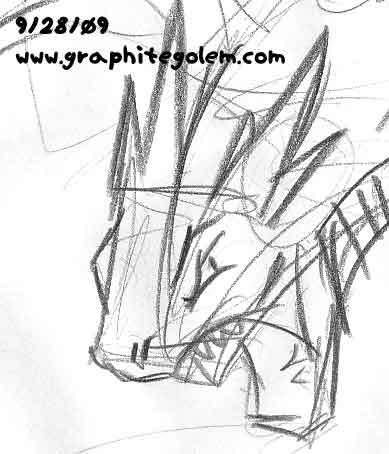 Finally, in a fit of frustration, I drew this, partly to remind myself that it does work, at least in theory, along with my forced perspective and reliance on visual cliche…

I did come up with something after abandoning the idea of doing a full-on view- the dragon’s rider (whom I won’t show right now for fear of the person I’m doing this for seeing it before it’s done,) wasn’t reading well either in a frontal pose because of the awkward position he was supposed to be in, which demanded more perspective and more foreshortening and just made me more and more frustrated and… argh.

Anyways, that’s it for Day 14, and still going strong. The blog is actually approaching 100 posts (a dubious honor, considering that it’s been hanging around in blog form for the better part of 3 years, I think, but I guess it’s better late than never.