Having parted company with our storytelling friend more than a week ago now, with and no sightings to report, Flimbert and I were beginning to lose some of our initial zeal. Fortune smiled upon us, however; midway through the day a Gerterrach- the smallfolk call them “Thunderfoot Dragons,” ambled out of the brush and asked us for directions. 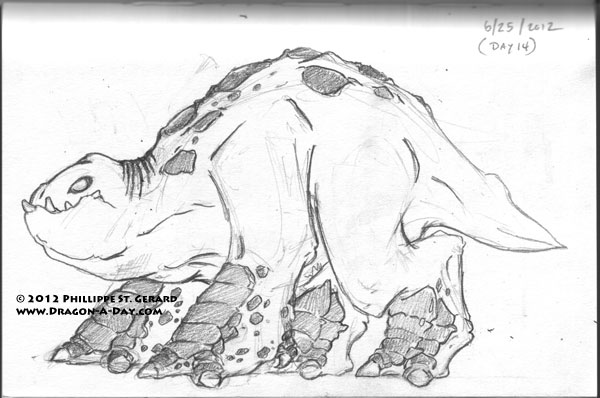 Despite her fearsome appearance, she was polite and patient as I did this sketch. As the name would imply, the Gerterrach are known for their heavy footfalls- they lack external fire and bring down prey and enemy alike by stomping with their massive forefeet, though something approaching from the wrong direction can just as easily be incapacitated by a well-placed kick.

In any event, she and Flimbert got to talking while I was working, and she revealed that she had not been this far north in quite some time, and the landmarks had changed, hence her confusion. Her own range is to the southeast; she was headed towards the mountains, presumably for a mating circle or other event, neither of us thought it especially forward to pry.