Our new friend’s (I did not ask her name, as it is often considered impolite to ask a dragon their name, though this is not always true; it largely depends on the situation. However, it’s safe to assume that if the dragon wants you to call them something, more often than not they will simply tell you) path ran alongside ours for another day and a half until we reached an easy crossing along the river.

I think that she noticed my constant glancing at her feet (or more likely Flimbert’s chortling at me as I tried to act like I wasn’t) and offered to let me examine them more closely: 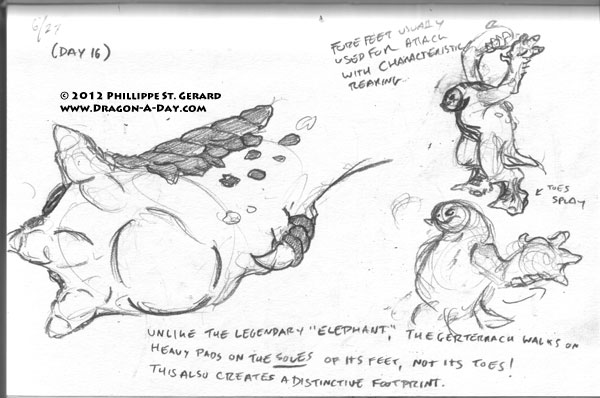 “Unlike the legendary “elephant,” the Gerterrach walks on heavy pads on the soles of its feet, not its toes!

This also creates a distinctive footprint.

I thanked her profusely and asked some questions as politely as I could, mostly about range of motion and other mechanical considerations (I left my comparative anatomy thoughts to myself- I am not so far in my dotage that I would dream of comparing any female, draconic or humanoid to an imaginary creature like an elephant!); despite appearances to the contrary, they are surprisingly mobile and flexible, with a range of motion similar to a bear’s- they can rear and stand upright for short periods, though they are a little too front-heavy to properly shamble.

Mostly it helps them break ice in the winter or reach things like (relatively) low-hanging fruit; in truth much of the power in their stomping comes from the upper limbs as opposed to momentum from weight. The slightly exaggerated joints in the hind feet absorb the shock of stamping as well, making it easier on their skeletons- not every dragon has the super-hard bones of legend, though many of them are denser than yours or mine!