Flimbert and I arrived in Marshport, a fairly new, yet very bustling riverside town to replenish our supplies and to spend a few nights in “civilization” before we were too far out, and as Fate would have it, we ended up spending a lot more time there than we had planned, because of an odd occurrence, or rather series of occurrences…

After some of the townsfolk heard about what I was doing, they recommended me to the mayor as “the dragon expert,” much to Flimbert’s amusement.

As it turned out, there had been some strange goings-on about town involving what could only have been a dragon of some kind, based on the descriptions of the creature, but they were all the stranger because of what exactly was happening- the dragon was stealing hats.

Another day and a half of further investigation shed considerable light on the subject- all the hats were made of straw. Taking the town’s rapid expansion and location into account, I concluded that the culprit was probably what those of us “in the business” (and yes, this affectation earned me another amused snort from Flimbert, but after four days of being flattered by the townsfolk, I did start to put on airs) call by the somewhat undignified name of Ridgesnout.

These dragons are fairly reclusive and not a lot is known about them aside from their general habitat, and that when they prepare for a hatching, they can be found gathering flammables (presumably to keep the young warm, as with the large array of slightly-hooked fangs that line their upper jaws, it’s unlikely that they’re using such things for food). It is widely supposed that they share a common ancestry with the sailbacks, but personally, I think that this is simple supposition.

On the fifth day, while taking some sun with Flimbert in the market square, my assumptions were proven correct- an old fisherman with a well-worn hat made of reeds was idling by a tavern near the riverside, when the dragon crept down from the slate roof, and snatched the hat right off his head before scampering back up and over the building and into the water with a splash. 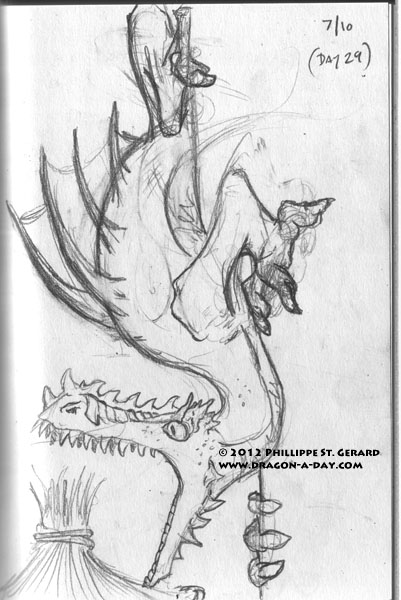