Once the culprit had been identified, it was a simple enough matter to remedy it- several crates of straw scattered around the edges of town, and the hat thefts promptly abated. Everyone was pleased, with the possible exception of the local haberdasher, but that could only be expected.

Flimbert and I did manage to get some relaxation in, though not as much as we wanted at first- the word spread quickly, and soon we found ourselves (or really I found myself,) deluged with questions, inquiries and other askings about dragonkind, with an especially lengthy (really, it spanned the course of several days, as a few folk ran from Marshport to get verification for their second- and third-hand information) round of question-and-answer about some of the local legends.

Of all of these, the most interesting was a young man who showed me a sketch of a (poorly) taxidermied head that someone else had described to him as being on display in a tavern several miles across the river.

According to local legend, this dragon (the local name was “Gorlangor”) was slain by the tavernkeeper’s ancestor, a ne’er-do-well who had been “chosen” by his fellow villagers to put an end to the dragon after they had grown tired of its continued predation on their livestock- the story went as far to say that the dragon would eat upwards of ten sheep a day. The actual method of slaying apparently changed with each telling (and was part of the back-and-forth), but typically involved some sort of display of martial prowess. However, the lack of how the dragon was killed blurs the lines of its exact type, as well as casting doubt on whether it was a dragon at all, and not just an overgrown mash lizard with some horns and extra scales pasted on, especially considering the state of the “trophy.”

Nevertheless, I have dutifully recopied the sketch that I was presented with. 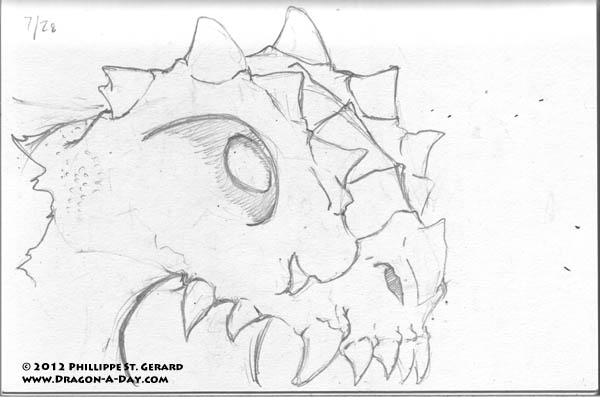 This entry was posted in Dragon-A-Day, Field Guide, Online, Sketch and tagged dragonslayer. Bookmark the permalink.