Flimbert and I joined up with a caravan that was headed out of Marshport. While we traveled with them, one of the guards told me of a dragon that he had encountered far to the southeast.

I had heard of the Tundun, as they are called by the humans of the southern lands (or “Lesser Stoneback,” as they are called by northern scholars, though this is wildly inaccurate), but have as yet to see one outside the pages of a book. He was able to describe their demeanor and behavior a bit beyond what I had read, filling in a few gaps that my private research had not been able to fill.

The dragons are not very large,  with the largest recorded specimen only the size of a large dog but they are dense; their plates, horns and bones storing mineral deposits and their flesh holding water quite well. They are fairly reclusive, keeping to the more inhospitable (to humans anyway) parts of the desert regions and shunning non-Tundun company for the most part, as I discovered to my sorrow, some of the various desert peoples hunt them for their horns and skins, a practice made all the more abhorrent because the dragons can talk.

However, others (my source included) among the humanoids of the deserts revere the little dragons, for they often (though unwittingly) lead lost travelers to water and shelter- they are tolerant of the extreme heat, though they do not enjoy it, and will seek cooler (albeit remote) places to wait out the worst parts of the day.

With the guard’s help, I put together a composite sketch- all of my reading only showed diagrams of the plate and other bones, and while a general consensus of the dragon’s shape has been reached, it is always helpful to have some input from an expert: 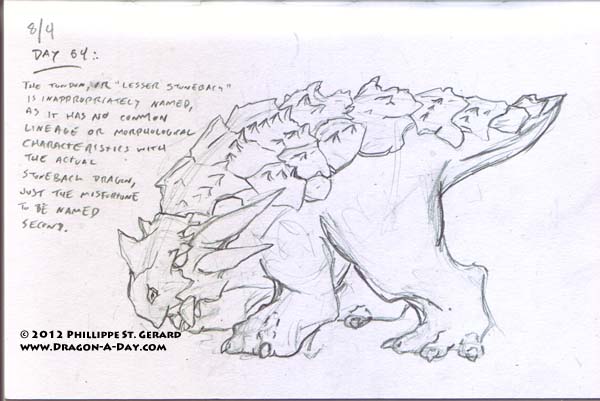 This entry was posted in Dragon-A-Day, Field Guide, Online and tagged Tundun. Bookmark the permalink.