Dragon-A-Day Online: Day 449: What Lies Beneath.

Having taken our leave of the caravan, Flimbert and I took in the sights of the Grand Bazaar for a few days before we continued on our way. While restocking our packs, we met with some dwarvish traders and traded news of the road for tales of the realms below.

Once they found out our greater purpose, and I had disabused them of the old miner’s tales that Rock Chewer dragons can be driven off by the scent of cinnamon (in truth, many of them are somewhat allergic to cedar, but this is not a very effective deterrent on its own, as far as I know) and Igneous Hoppers cause mangy beards (the only depilatory effects these dragons might have would be to accidentally singe off offending hairs, I’m afraid; I do wonder where these things get started!), they told me of a dragon that they actually liked.

For the most part, dwarves have little truck with dragons of any stripe, aside from fighting them or driving them off, but they seem to tolerate (and in some rare cases, encourage) a long, rangy line of dragon they call “Trenchcrawler.”

Less deleterious to their economy than the Rock Chewer, and completely unlikely to appear in a spray of magma like the Hopper, the Trenchcrawler is fairly unobtrusive, reaching no more than 9-10 feet in length, and, as the name suggests, keeping to trenches and other shallow grooves in the earth, where it hunts for food, mostly giant slugs and other soft-bodied subterranean creatures like slimes and aggressive fungi that pose a threat to miners, but also more annoying creatures like the blind cave rats that often carry lice and other vermin. 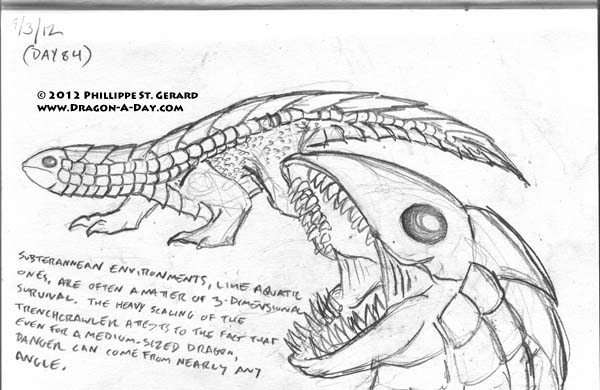 While our companions had never seen a Trenchcrawler dead from violence, none of them knew why they had such thick armor around their necks, backs and undersides; their scaly skins are resistant to the corrosive slime of even the largest known cave slugs, and none of them had ever seen one with any real pitting or burns on their plate.

This only led us as a group to conclude that there must be something out in the deeps that preys on them, and perhaps the dragons were relying on the presence of the miners to keep that Something at bay, just as the dwarves had come to enjoy the continued reduction in pests and hazards due to the Trenchcrawlers’ presence.