The last few days have sort of gone by in a blur. Nothing of any arcanobiological import, I assure you, but it has been a fairly busy time. Now that I have a moment or two to collect my thoughts and write something down, let me quickly recound another story that the dwarves told Flimbert and myself.

On the rocky shores of the dwarven lands and other distant, similarly rough terrain, one can find the reclusive Gravelhide Dragon. These dragons live primarily on a diet of shellfish, even diving deep to search for giant lobsters and oysters for days at a time, it is believed.

I say “believed,” because although the dragons are totally capable of speech and reasoning, they have a strong distrust for most other creatures, and prefer to be left alone. At the same time, it has been reported that they will “adopt” lost or injured humanoids, though they make it more than clear that they are only “putting up with them” until such time as their charges are ready to leave, though the dragons are either slow to admit that their adoptees are hale enough to return to their own kind or simply loath to let them go. 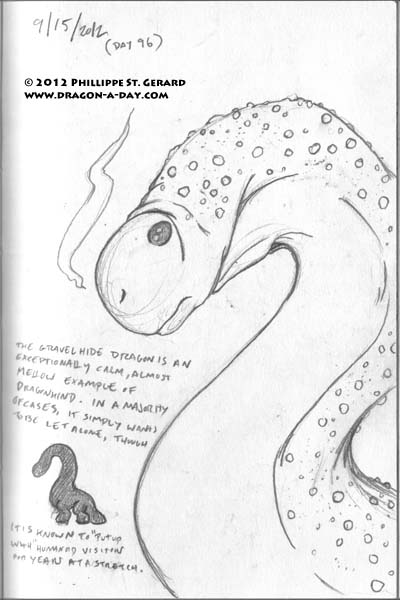 I mention this because as it turned out, one of the dwarves I spoke of had been swept out to sea after being knocked into an underground river during a mine collapse. He was rescued by a gruff but very caring Gravelhide and returned to his people some five years later, after he was able to ascertain where he actually was and how he could get home. the journey itself was fairly short, but the dragon tended to obfuscate the details of where its lair was in relation to the rest of the world…

He later tried to return to the dragon, to present it with a gift, by way of thanks for saving his life, but the dragon acted as if it did not know him, and drove him away with threats of violence. He dropped the gift in the process of beating a hasty retreat.

He returned the next day to try to talk some sense into the dragon that had sheltered him for years, and on returning to the spot where they had had their confrontation, there were the signs of the near-altercation, though the gift- a delicate-but-large piece of precious metalwork and filigree- was nowhere to be found. Even if it had been smashed to flinders, that much should have been obvious. The place was so remote that truly few, if any other creatures that might value such an object would be interested in or even able able to carry it away…

He did not return after that.

This entry was posted in Dragon-A-Day, Field Guide, Online and tagged dwarf, gravelhide. Bookmark the permalink.