Today, October Tenth, holds a special place in my heart. Many of you will not get it, but for several years, I referred to this day (in my head, anyway) as the Day of the Leviathan, because I’m a giant geek.

Magic: the Gathering’s Leviathan is (C) Wizards of the Coast.

So with that in mind, we will briefly examine this singular vaguely draconic monster of biblical proportions. I’d have gone into it more, but I had other obligations today that prevented me from taking the long look that I suddenly want to take at the descriptions that there are to be had.

First off, just say the name. Leviathan. Leh-VIE-Uh-Thann. Doesn’t if just roll off the tongue? It’s not quite “Mufasa,” but it’s a powerful name, suiting a creature so potent that God had to kill its mate so they would not breed and wreck the ecosystem.

According to most ancient Jewish midrash, the Leviathan was created on the fifth day (Yalkut, Gen. 12). Originally God produced a male and a female leviathan, but lest in multiplying the species should destroy the world, He slew the female, reserving her flesh for the banquet that will be given to the righteous on the advent of the Messiah (B. B. 74b).

The Leviathan is a big, (probably) angry ocean-dwelling scaly creature that is at times, described as breathing fire. He is also described in the Book of Isaiah as a “gliding serpent” and a “coiling serpent,” so it is pretty clear that he is somewhat ophidian in shape, but he is also described extensively in the Book of Job Chapter 41 as having some other aspects that defy the normal serpentine form. The important bits (as translated in the New International Version of The Bible, as opposed to the except for this post, which comes from the New Century Version of Job 41) are as follows:

So Leviathan has limbs. Whether they are flippers or crocodillian limbs is unclear, but he is not an overgrown sea snake.

“…His back has rows of shields tightly sealed together;
each is so close to the next that no air can pass between.”
-Job 41:15-16, NIV

“His undersides are jagged potsherds,
leaving a trail in the mud like a threshing sledge.”
-Job 41:30, NIV

His back is heavily armored, as is his underside. The second quote suggests that he is amphibious, leaving trails through mud, but this could also be just the monster coming to attack something on land and slithering back into the ocean.

…”His snorting throws out flashes of light;
his eyes are like the rays of dawn.
Firebrands stream from his mouth; sparks of fire shoot out.”
-Job 41:19, NIV
(Artist’s Note: The quote does not seem to be the same across databases; after copy/pasting this in 2009 and editing the post in 2013, I could not find the exact quote in BibleGateway; Job 41:19 instead reads “Flames stream from its mouth;  sparks of fire shoot out.”)

Like many other draconic monsters of the time, he is able to breathe or emit fire or radiance, some sort of killing power from afar, and might even do it without thinking, due to his sheer awesomeness.

Based on these thoughts, I came up with these concepts. Again, I didn’t have the time I wanted to spend on them, and I’m not sure that I got the scale right in the second set. For the curious, the quotes are from the New Revised Second Edition of The Bible, and I found them especially evocative; considering that the NSRV did not appear on BibleGateway.com’s list of sources. 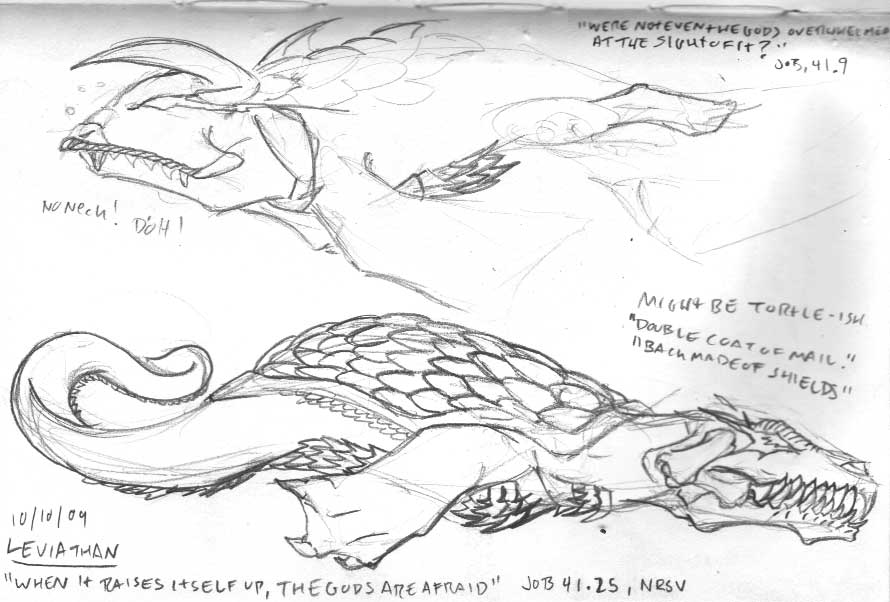 I read on Wikipedia that Leviathan subsisted on “one whale a day,” so first I toyed with large jaws that might hyper-hyper-extend to perhaps swallow the cetacean whole (hence the partial skeletal drawing), but then I ended up deciding that Leviathan is just BIG, and has a slow metabolism or something. The horns on the aborted, no-necked sketch came from this bit from Wikipedia on Leviathan in rabbinic literature:

“He had horns upon which was written: ‘I am one of the meanest creatures that inhabit the sea. I am three hundred miles in length, and enter this day into the jaws of the Leviathan'”

I thought it might be cool to have a tattooed Leviathan, but then abandoned it, which is a shame, because the head of the last one I got to do looks a little bare:

I’m not sure how the vertebrae evolved into the “shields” that protect his back, but I kind of like them. I admit that I kind of hastily finished them, as well as his belly scales, towards the end.

This entry was posted in anatomy, Dragon-A-Day, Fan Art, Sketch and tagged ass-kickin', legendary, Leviathan, The Bible. Bookmark the permalink.