So I went to Comic-Con today, and missed all the events that I had planned to go to because of massive overcrowding.  I didn’t have a bad time, but I didn’t do what I came to do. Then, on the way out, I managed to sell a bit of swag for $5 cash and a Metrocard that was said to have 2 fares on it (a $4.50 value).

My friend Jiaxing said I was really lucky and should use that money to play the lottery. Instead I used it to enter a draft at Twenty-Sided Store. I met some cool people but drafted a subpar Radkos deck (drafting only 2 rares in the process) and went 1-2. I didn’t have a bad time, but I didn’t do what I came to do.

On the way home, I tried to use the new Metrocard. It was empty. Well played, Comic-con urchin; well played…

“Luck is as relative as it is fleeting.” 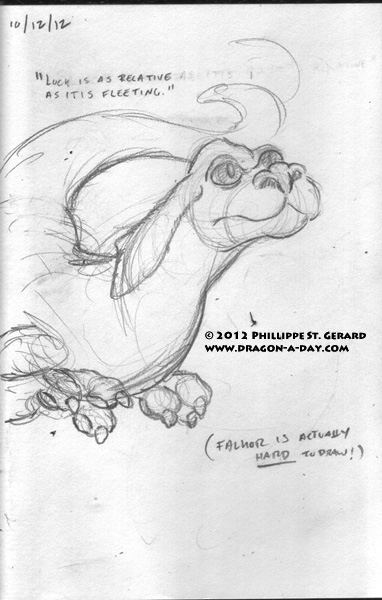 For those of you keeping score, this is the second time that Falkor the luckdragon has appeared in this blog. For some reason it was super-hard to draw him. I had started drawing him like a serpentine lung dragon, then for some inane reason, I felt compelled to get references.

Turns out that even though the poster and the book have him possessing a serpentine form, in the movie, he very much has a clearly defined trunk, which actually makes my previous sketch off-model. It was hard to keep the drawing in the original spirit when I kept thinking of a skeletal structure that was more like a terrestrial animal.

And on the subject of Falkor’s skeleton, this is a thing. (Not for the faint of heart, but work safe.)