With everything that’s been going on these last few days, I almost forgot that it was Halloween today. While I didn’t have candy for the small mob of children that came to my place, I did manage to placate them with bags of chips.

But that wasn’t the scariest thing that happened today. 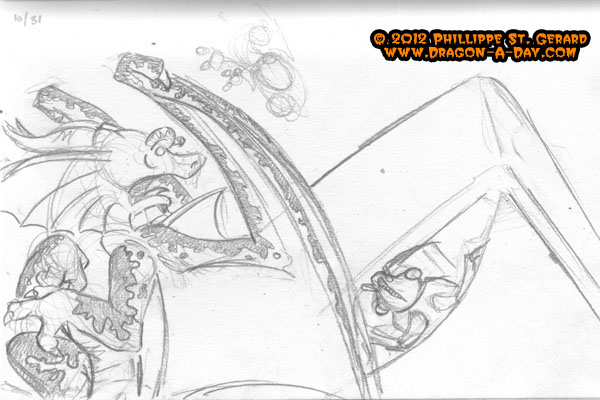 The bedbugs were not mine; they were at a friend’s place. We started to work on controlling the infestation, but there’s more work to be done.

Also, I know that it’s not a very accurate bedbug; I couldn’t really bring myself to look at magnified images of them after spending several hours catching as many as I could on pieces of tape and/or vacuuming them up while sealing cracks in the baseboards.

PS: This didn’t really qualify as “scary” but it’s a fairly disturbing bit of trivia: Bedbugs are one of a smallish handful of species that reproduces via traumatic insemination, and it’s every bit as terrifyingly awful as it sounds, because they aren’t bad enough.

This entry was posted in Dragon-A-Day, Online, personal, Sketch and tagged Halloween, Holiday, my dragon, parasite. Bookmark the permalink.