Through a mixture of serendipity and generosity, I was able to attend Con on the Cob. However, I hadn’t been planning for this chain of boons to pan out, so following a flurry of last minute preparations, on the Wednesday night that was the first leg of my journey, I found myself sitting on a bus just shy of midnight realizing that I had no dragon for that day. 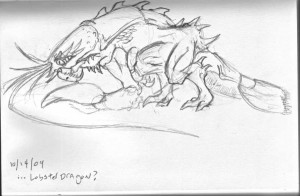 I had planned to celebrate (or punish myself for, you decide) 30 days of Dragon-A-Day with a 30-headed dragon, but in my rush to get ready for the con, I miscounted the days, and belatedly realize that my 30th Dragon-A-Day was the unfortunate Lobster Dragon.

I’m ashamed to admit that I got the claw wrong; for some reason I could not remember that the “thumb” sets into the top portion. This annoyed me greatly, and that, combined with the overall patheticness of the creature kind of made me give up. I recall thinking something along the lines that merfolk would not hunt them, and other dragons find them inferior. The Lobster Dragons themselves are a miserable lot, knowing that they are shunned and despised, but persevere, they are tough to kill and surprisingly long-lived, even for dragons, and often collect information and lore, if one can be bothered to deal with them.

On the way to the con on Thursday (a 6.5-hour drive from Binghampton, NY), I drew 20 or so of the heads here, and finished the rest of them at the con: 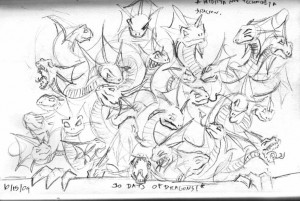 This got pretty repetitive pretty quickly, as you might have guessed. I didn’t have much of a plan for it, aside from “I need 30 heads, and they all have to look like this one in the center.” I’m not sure if I meant for them to look like the Hydra from Hercules: The Legendary Journeys, but they do. 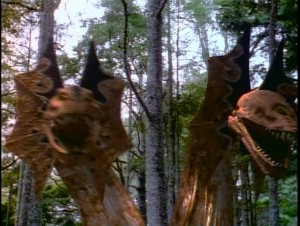 On the second day of the con, I drew this fellow while attending a marker demo, which was shortly followed by an impromptu watercolor demo. I was really happy with the left foreclaw and the lower jaw, but the rest of it wasn’t working for quite awhile. the hindlegs were supposed to be in a squatting, knees-up position, not resting on the haunches like they are now, but it just refused to work any other way. Even now, I’m still not totally thrilled with it, though it doesn’t hurt the look of the creature. 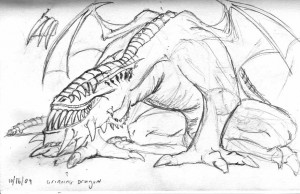 I’m also not sure where the eyes went, but then I covered them with scutes and “super-ears,” which gave it more of a batlike, subterranean look. This, combined with the large foreclaws made me think that it might not need a standard wingspan, though it probably ought to at least be able to glide- it looks a little more like a gargoyle than a proper dragon.

On the third day of the con, I knew I needed to get a dragon done before all The Parties started, because I’d be too tired to do anything once I’d been partied out. So I drew this, which didn’t work out. At all. 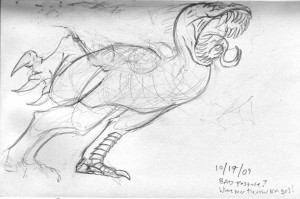 This annoyed me, because I really liked the head, left fore- and right hindclaws, but the rest of it wasn’t flying. (There was also nowhere to put the wings.) I had wanted the right foreclaw to be upraised, as if the dragon were about to smash/rend something, but it wasn’t going well.

I had also had the bonus dragon from Day 29 on my mind, and expanded his story a bit: 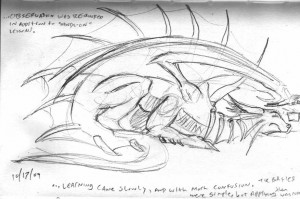 As always, click to enlarge. (He’s peeking into a house.)

On the fourth day of the con, I wasn’t actually there, instead making my way home. While sitting on the bus back to NYC, I pondered all the stuff that had happened. Larry Elmore had given a demo on Saturday afternoon. This was originally going to be an oil painting demo, but due to a snafu, he didn’t have any paints with him, so it turned into a drawing demo, where he covered two of my favorite subjects: drawing dragons and drawing pretty girls. There was a lot of comparative anatomy involved in Larry’s work; several times during the discussion, he mentioned the grace as well as the relatively alien nature of the dragon, as well as using birds for reference, along with dinosaurs, but I’m thinking that birds were the bulk of the references, from what I remember of what he said.

Following the demonstration, I showed Larry my Dragon-A-Day sketches; he liked them. This made me happy. So on the way home, I compared my style of head construction to his. 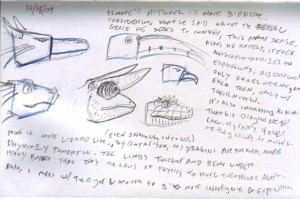 Both of us use the wedge shape, but he extends his with “a shape like half a loaf of French bread” for the muzzle, which gives it something of a birdlike countennance, as opposed to my lizardlike “eyes on top” wedge-only construction, although his is similar to what I had been looking at in my figures here. Neither of these is wrong, but it was interesting to think about for awhile.

And that’s all I got- 5 days of Dragon-A-Day, condensed.