Dragon-A-Day Online: Day 525: The Affairs of Dragons, Part 2 of several.

“Interloper? Aye, I know of that one.”

“Mutant, mongrel, or monster, it may claim kinship with dragonkind if it wishes, though it will likely come to regret such rash actions.” 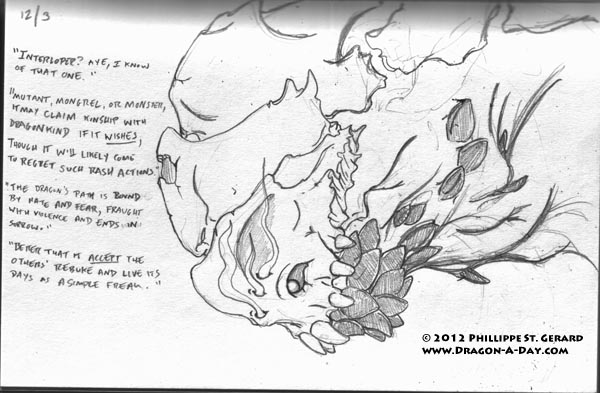 “The dragon’s path is bound by hate and fear, fraught with violence and ends in sorrow.”

“Better that it accept the others’ rebuke and live its days as a simple freak.”

Artist’s Note: I’m really happy with the way that the Old One’s chin scales turned out. Instead of the studding that the previous sketches had, I decided to do something a little more organized, though it does not have as many as it probably did when it was younger.

This entry was posted in Dragon-A-Day, Online and tagged The Affairs of Dragons, The Interloper, The Old One, what makes a dragon. Bookmark the permalink.

1 Response to Dragon-A-Day Online: Day 525: The Affairs of Dragons, Part 2 of several.