The random word generator was throwing me a few curves today. Started with “Bracketing,” followed by “Democratic,” (I switched to adjectives) “Digital,” which I didn’t want to do, then “Deranged,” because D words were in style. 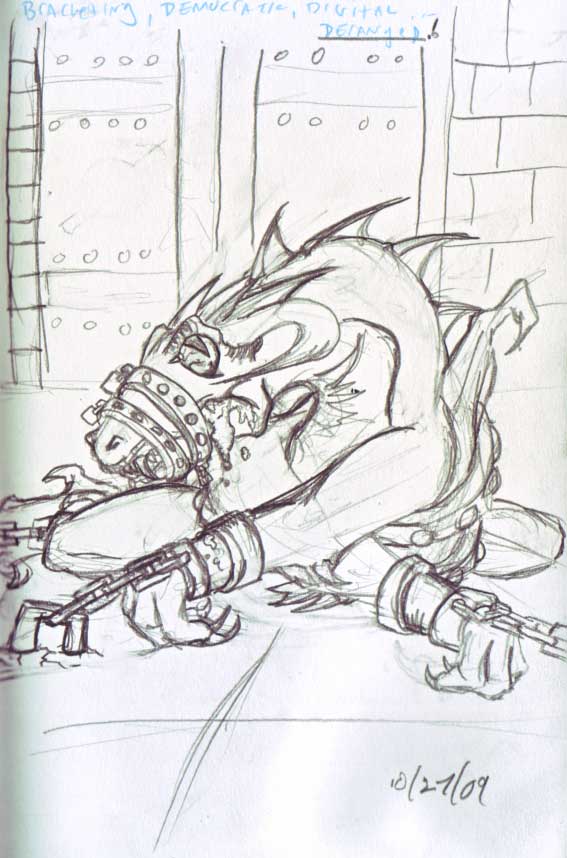 This is probably one of the worse ones I’ve done; I don’t think that it reads that well, but i didn’t have time to go back and do another one. I found the idea of trying to restrain a crazed dragon interesting, though I belatedly realize that pulling the forelimbs in either direction like that is probably really, really painful, since they’re not meant to go like that at all, unlike the human shoulder/arm.

The tail is just bolted to the floor- I had thought of something “in voice” with an old orderly explaining to a new recruit the ins and outs of the asylum, and why you don’t give the dragon an extra fifteen feet of tail to hit you with when it breaks loose, but I’m sleepy, and not entirely satisfied with this to go much further with it from here. Perhaps some day I’ll revisit it.

This entry was posted in anatomy, damnit, Dragon-A-Day, Sketch and tagged random word. Bookmark the permalink.