For those of you woh don’t know, I live in an old, adjoined house. When we used to have cats, they would make thier way into the neighbors’ basement.

Now that we don’t have cats and the neighbors do, the opposite is true. One of their cats was in our basement today, meowing up a storm for catty reasons that I can’t begin to fathom. This, along with finding a dead rat on the stoop last week led me (naturally) to thinking about a dragon small enough to hunt rats: 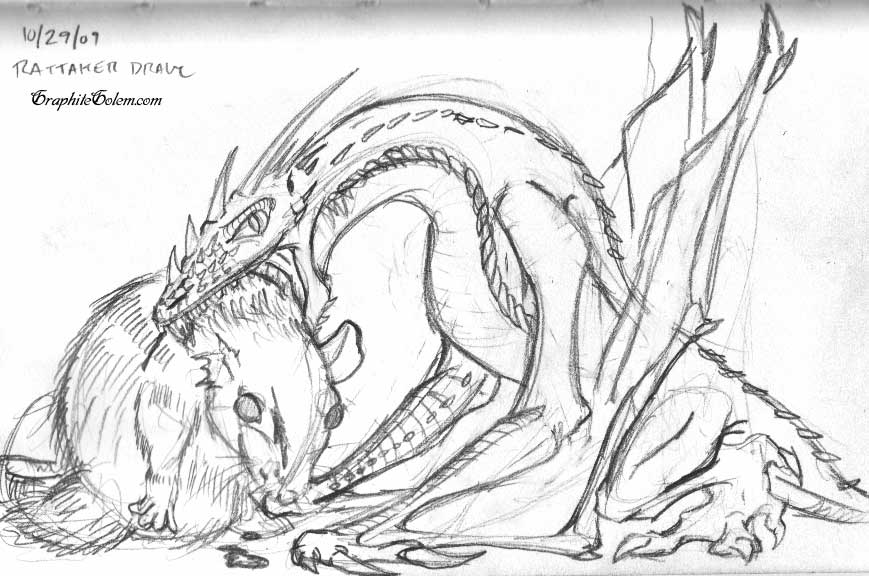 After a few weeks on the road, we arrived in the village. It took awhile, but finally, Vindir, our druid noticed it- the place was cleaner than most, despite its small size and comparative poverty. The townsfolk eyed all of us with hesitation, Warren especially suspiciously, although it was later found to be his familiar that they were concerned about, although the fluffy tomcat is as harmless as our resident diviner.

When questioned, they explained that they saw my broadsword, and assumed correctly that we were out dragonslaying. They assured us that they had “no problems with dragons,” and if in fact we had a mind to do some dragon-killing in their vicinity, we “had best move on”, for they loved “their dragons.”

Vin took it upon himself to seek out the wise folk of the village, and got to the heart of it: for whatever reason, a small kind of dragon- smaller than a cat, had taken up residence in the area before this place was settled. Cats would not stay in the surrounds, and the small wryms would not willingly go where cats had made residence, although when brought into contact, the two would simply pretend that the others did not exist. The “Rattaker Drakes,” as they called them, do not speak like proper dragons do, but seem to talk amongst themselves -and their humans- in a strange trilling song, almost like purposeful birdsong, as we all found the next morning, when the innkeeper’s new boy forgot to sweep out the oven before lighting it.

The creatures were not harmed, but they were annoyed, and chided the oven boy loudly and at length.

Thus rested and educated, we continued on in our search…

This entry was posted in Dragon-A-Day, personal, Sketch and tagged rattaker. Bookmark the permalink.