I didn’t have anything in mind today, because I am really tired. I was running around from the comfort of my office chair putting out imaginary fires because of the chance that the Boston Red Sox might win the World Series, and it’s been a draining experience.

So I   turned to the side, picked up my sketchbook, and started drawing a dragon’s head and neck, like I often do when I am feeling unable to really innovate or keep something on-model: 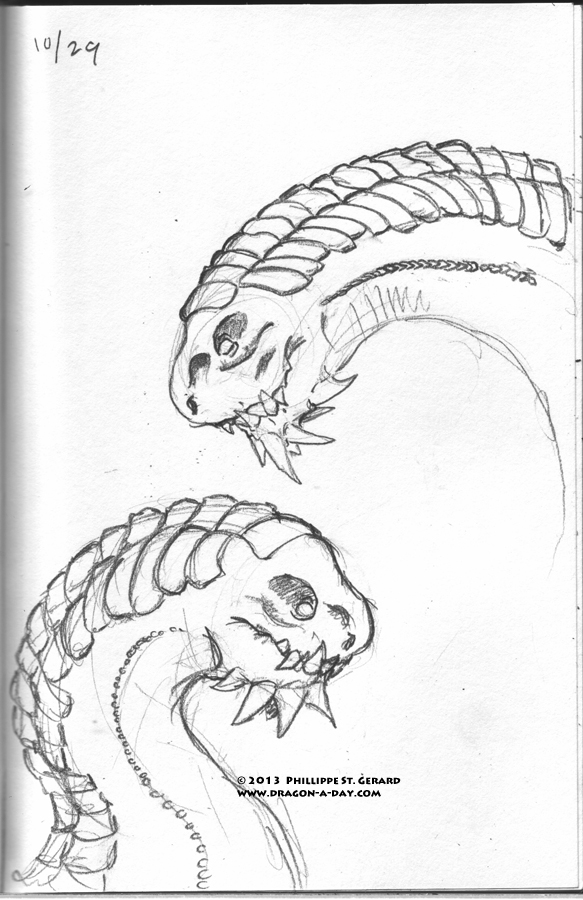 As I sketched about, I found myself trying to explore the shadows and crags of the dragon’s face. I wanted deep-set eyes and figured that they would be in some kind of shadow. Then I wanted that strange hollow along the snout that you see on some renditions of Tyrannosaurus Rex, and felt convinced that there needed to be some sort of massive cheekbone.

That was the dragon on the top. The page seemed a bit empty, so I tried to do another dragon of the same type, specifically setting out to depict an individual as opposed to drawing the exact same thing over again, as that was lighting-in-a-bottleish. I feel okay about the second one, though the actual shape of the first one’s head is probably beyond my faculties at the moment.