Today’s post is brought to you by sleeping late, working all day, and going to a post Thanksgiving dinner that ran late (we watched “Raising Arizona” after everyone worked their way through their food comas).

Oh, and of course, the draconity queue.

This is Xar. Instead of a description, he referred me to the image here, which is a mockup design for a fursuit he is planning to have built. He also wrote:

There are a couple errors in that refsheet – I wanted three wing fingers, not four; and feet have four fingers, not five…
Don’t know why, but having feet with five fingers like in that drawing seem strange to me, at least for a dragon.

Also, I think that the second pose shows horns way too “open”… I mean, they’re a bit more “parallel”. I don’t know how to explain that.

I’d like to see a quadrupedal version :)
Wings should be bigger too… if you kept them roughly the same size I think they’d be way out of proportion for a quadrupedal. 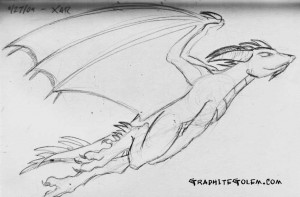 A short discussion about the dragon’s ability to fly and the size of the wings ensued, as well as some questions about the furry bits on the arms, head and chin- those are actually supposed to be short spines.

One of the problems that I have when working from another person’s artwork is that if the art is bad, then the art that I end up making is bad too, often in the same ways. The reference picture I had for Agent Liberty (a commission I worked on) was poorly proportioned, and while I was checking it for costume landmarks (how long are the gloves, where does the skirt end, etc) I found myself with a tall stack of Bad Drawings. Working from Xar’s reference sheet gave me the same problem. The suit has three different heads on it, with three different muzzles, for example.

Anyhow, it’s done, to the best of my present ability, considering the resources that I had to work with. And that gutter shadow is really starting to bug me, although I like these little sketchbooks I’ve been getting… Bleh.

This entry was posted in Dragon-A-Day, Sketch and tagged anthro, draconity, flight, flying. Bookmark the permalink.