So I was supposed to go to a beekeeping class tonight. Or for the sake of clarification, I was supposed to attend in person, then I decided that I was too frazzled after my first day at the Block on top of light sleep rations the last few days and went home, ostensibly to at the very least put it on in the background while I tried to make dinner.

I’m annoyed to admit that that didn’t even happen, though I found myself thinking about bees most of the night.

Once upon… oh about nine years or so ago (it’ll be 10 this June or so), I was using a small yellow dragon with big black eyes and a pencil for a tail tip in what amounted to my personal branding (my portfolio spine and letterhead, though I don’t think that there was a matching business card for some reason).

While doing things that made me less agitated (first day at work was a first day, but even for a first day, it was vexing), which really just consisted of making a Commander deck around Prossh, Skyraider of Kher, I considered reprising that little dragon for tonight, because I remembered that the file (as captioned above) was called “beedragon.jpg.” I decided against it in favor of something a little more in theme: 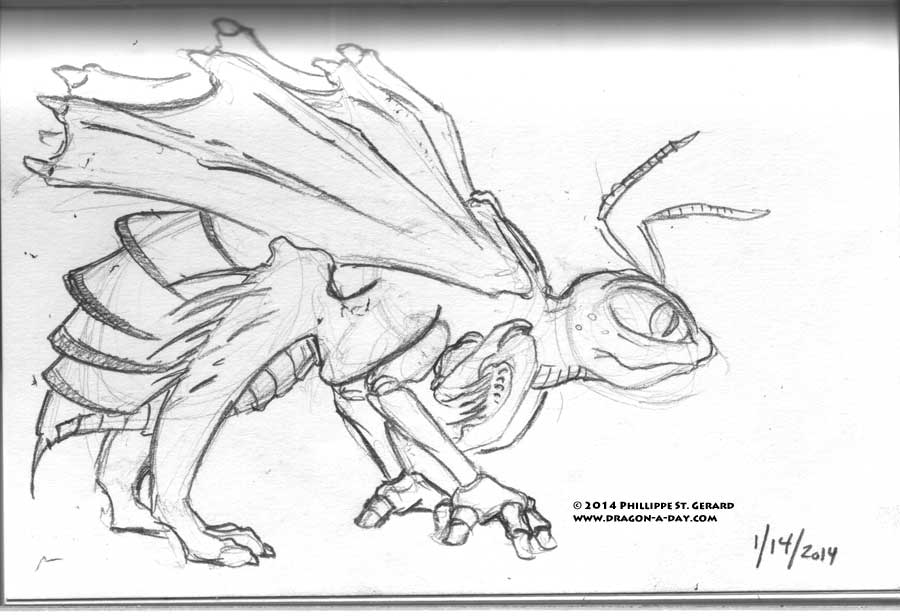 I kind of feel like there should be more textures in this; though I’m not sure where- like The Interloper and others before this, the lines where chitin and scale meet create interesting questions, like how this would actually work as a living creature, because the structures that support a fleshy creature don’t really work with an arthropod, and I seem to err on the side of not doing enough when I start to wax philosophical. Also, from the wrong angle I find myself thinking “needs a bit more dragon,” but I’m not sure…

I do like what I did with the pollen baskets, though.

This entry was posted in anatomy, Dragon-A-Day, Online, Sketch and tagged bees, portfolio, scales, what makes a dragon. Bookmark the permalink.