So Selroth went back to the drawing board and sent me some sketches on how the construction lines were supposed to work. He uses them a little differently than I would have thought, so a small part of the oddness of the last round of concepts was miscommunication.

However, the overall narrowness of the Selroth head is here to stay, at least for now, and it’s still proving problematic for me, possibly because I am still thinking of it as a catlike creature, where the current organization is more lizardlike, although a friend pointed out that there was a porcine look to the previous version that I don’t think I’ve been able to shake- I blame my nostril placement. 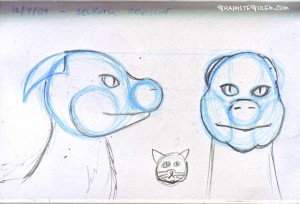 While we’re on the subject of anatomy, I spent a few minutes (literally, the train suddenly got very crowded) thinking on dragon hands. I’m sure there’s a better way to do this. The problem at hand (as far as I see it anyway, I took a half-hearted stab at looking it up, but then gave up) is that it’s a plantigrade creature (as opposed to digitigrade creatures, which are quadrupedal-type feet that many of us are more familiar with) with opposable thumbs.

Try walking on your hands for a bit. It’s hard; and not just because your shoulders aren’t positioned correctly. Maybe your hands are more flexible than mine, but it’s not that easy on the digits.

Looking at reptile forelimbs wasn’t much help either; although there are digits that might become thumbs in lizards and crocodillians, given time, the digits seem mostly to be less than suitable for the fine manipulation that you’d expect a hyper-intelligent creature with thumbs and magical powers to have.

So with that in mind, I started wondering if the draconic hand might be a little like the elephant foot, with padding under the joints, as opposed to walking on the toes. 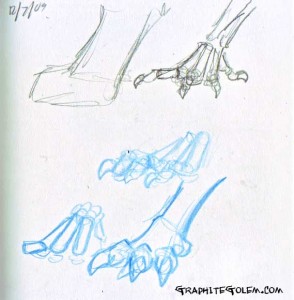 And finally, here is an actual dragon.

I’d been mulling over the idea of draconic courtship and mating (the logistics of the actual act as well as any social implications/obligations) for some time. Several friends of mine have been after me to varying degrees to “get back into the game,” since I am unattached, and lately one in particular has been especially persistent about joining one particular online dating site.

All of that led me to idly wonder about all the hoops that a person apparently has to jump through in the Search For That Other Person, and whether or not dragons, with their relatively exponentially smaller, and often described as very tightly-knit, status-oriented communities, would do anything similar. Conversely, giving a nod to the more bestial nature of the dragon, it might be something simple as a heat cycle, mating call, plumage/color display or other similar animalistic method of acquiring a mate, and any sort of actual bonding might come later, like the Valin from the Dragonlance series or what the Vulcans have (I think). 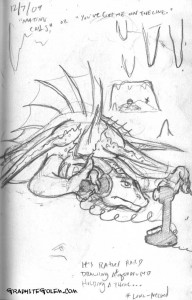