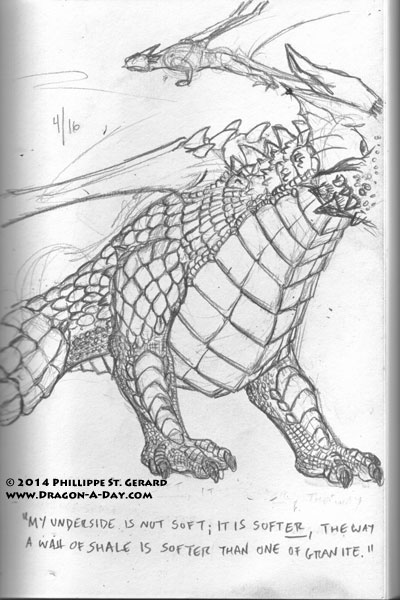 “My underside is not soft; it is softer, the way that a wall of shale is softer than one of granite.”

I had first wanted to try a different posture than the “hunting predator” that is so common for the Western Dragon, but a lizardlike posture (see the small sketch at top), even that of a veritable real-world dragon keeps most of the underside sheltered, to say nothing of the unfamiliar arm posture.

I cribbed the broken horizontal banding from this rock lizard, because the long simple plates seemed lazy. Also, they probably work better for when the dragon breathes.I felt slightly at a loss as to how to cover the dragon’s dorsal sides/flanks, but this page about herpetology in Mindo had veritable gobs of information on different scale patterns and even names of scales (eat that, Wikipedia). Makes me want to buy their book out of gratitude.

I had at first thought to just draw some underbelly scales, but the dragon ended up chasing itself, though by the time I realized what was happening, the darling had become too precious to risk murdering by adding in that missing hindleg.  The head might also be a bit too big for the neck, now that I’m looking at it, and I did risk killing the darling by thickening it at the very end; maybe I didn’t make it thick enough.