So not some 50-odd days ago, I was still wrestling with the nature of Wrath. I didn’t forget, but I got caught up in the mysteries of shading and the vagaries of my life.

This afternoon, in order to avoid sleeping through a presentation, I decided I would just move on to Envy. 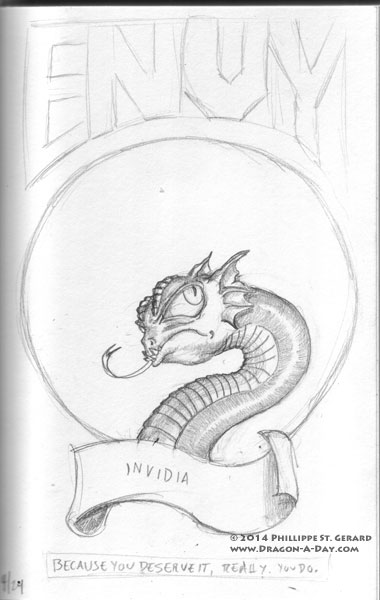 I toyed with the idea of giving Envy some aspects of the other six, but all muted to an extent, but that also came to mean in my mind that Envy should have a horn of some kind, and I decided against it. Also, armor-plating Envy didn’t make any sense. The eyes ended up being bigger than Gluttony’s, but I’m okay with that- Gluttony should have big eyes and a bigger mouth, whereas all Envy can really do is look around… I especially like the sour, pouty expression.

In hindsight, I probably should have saved the rendering treatment for Pride first, but after these last few weeks of doing More Than I Have Been Lately, it didn’t feel right to leave Envy without some sort of shadowing, though I probably should have tried to do something with the text around him. Then again, I’m still not sure how said text will actually look, so I didn’t want to get too caught up in it.