Without getting to much into it, apparently I can not has internets. This has not stymied my daily dragon sketching, however it has prevented me from posting them as often as I might have liked.

“Although you may desire them, and badly, there will be those who are simply not your prey.” 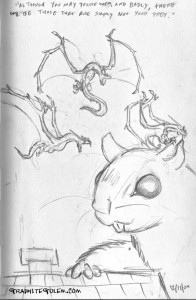 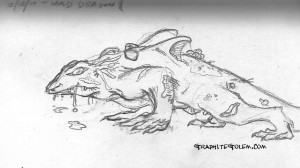 I found myself on the train, thinking about the Dragon-A-Day, and decided to take a deeper look at the strange and gnarly Mold Dragon. I’m still not sure what it is, whether it’s a dragonlike corpse filled with fungus or some sort of symbiote, but it’s interesting. I’m debating the vent on the back- it might use some sort of control over internal gasses and such to make itself light enough to fly, then use said gasses to decelerate/land.

“There are few feelings quite like bringing down your first kill.” 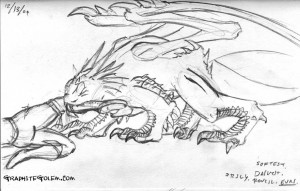 Day 91
This weekend was filled with pomp and circumstance over the birthday of a dear friend of mine, who had a 3-day celebration of her *mumblemumble*-th birthday. I passed on Day 3, but by the end of the weekend, I was totally spent. I still needed a dragon at the end of Sunday, but I was super-tired. 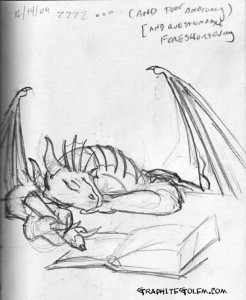 I need to do a reference sheet for an anthropomorphized version of my personal dragon, so I can stop feeling like he’s off-model when I do things like this. 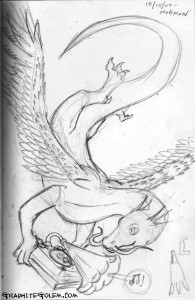 This is Mottmon, one of the last few dragons in my current draconity queue. He writes:

Size: 15 feet long, 3 feet tall at the shoulder (or a bit taller, probably)

Feathered Wings (but scaled body, no feathers anywhere but the wings :B)

Really rather plain other than that, white body, the face is mostly like that in the picture [of his avatar on the forum]

Things to keep in mind are that I am a music freak and you could probably most likely see me wearing a pair of headphones and dancing to music that I’m listening to on my laptop XD and that I’m very random :>

Taking the last part in mind, I didn’t want to put headphones on over his head fins (assuming that they are protecting his ears, placing them made me cringe a bit) and I couldn’t think of anything more random than a phonograph, considering Mottmon’s audiophilia. He also gave a visual reference, as we were talking about the forefeet, they were more like bird feet, but they ended up coming out more like hands. I think it’s the thumbs. I wanted to move them further towards the middle of the wrists, but I couldn’t quite wrap my head around it.

And that’s all I’ve got. The library is about to close, so I’ll call this a wrap for today. Ironically, I still have to draw today’s dragon, which will go up tomorrow.