I spent way too much time playing MapleStory tonight (made it to Level 30 with my main), and lacking the gumption to come up with something completely new, decided to do another breath weapon sketch: 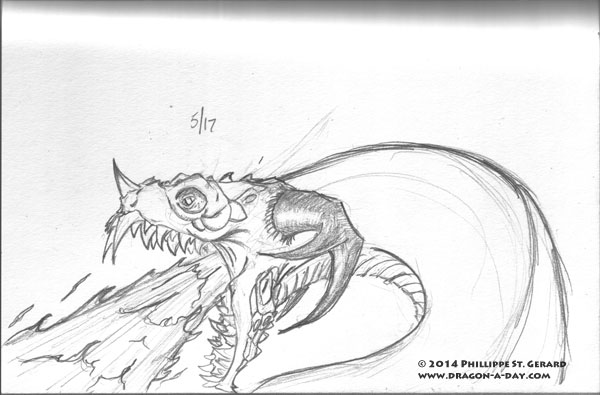 Belatedly, I realized that the fiery breath would be throwing back a hell of a lot of light, so I added highlights on the horns (the head almost went unadorned, but I felt strongly that something should be there, and the bony plates around the eyes would not work well with a fleshy ear).

The shape of the jaw could also use some work- the perspective/angle of the head made that a little odd. And I probably shouldn’t have tried to “plate up” the jaw after drawing it without planning to do that- it just kind of looks tacked on, not like it belongs on the dragon.

Despite all of that, I feel okay with it, and wish I’d had a bit more time and gumption to wrestle with it some more- the idea of lighting from the dragon’ mouth and all the havoco of shadows is something that I’ve considered more than once.