So I was in Boston again on another one of those journeys where I travel 10 hours to work about 3. Once again I found myself riding the Lucky Star Bus, because the only other bus, a Greyhound bus, was supposed to get back to the city half an hour later, though in hindsight (meaning immediately after I had bought my Lucky Star ticket), I found myself wishing that I had done it the other way around, because I’d be able to draw or do anything on the way home, even if it took a little longer.

However, the journey was less onerous than I expected, once I’d resigned myself to sleeping the whole way. The bus clattered and shook, bouncing my head off the window more than once, occasionally I heard someone (or several someones) speaking loudly in Chinese through my earplugs, and the ride was a bit stuffy, but we got into NYC a half hour ahead of schedule, so I’ll call it even. 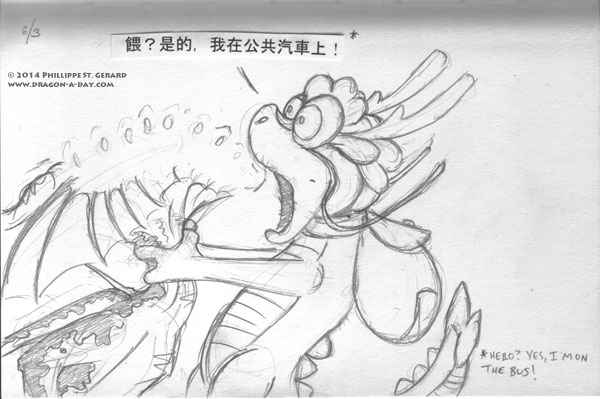 This pretty much sums up my ride on the Lucky Star Bus, except I forgot to draw a window for his head to be bashing into at the same time.

I’m not sure how I feel about the Lucky Star dragon’s vacant expression- putting eyelids on him seemed wrong since he doesn’t actually have them, and any expression I ended up putting on him either made him look too aggressive or strangely dispassionate, though the second might have been better, since those loud-talking people probably did not know nor care that they were keeping me awake. Also, I didn’t have a chance in hell of reproducing the characters, so I left that up to Google. If it actually reads something like “hooray? atone phytosociology elfin!” blame them.