So I seem to be gaming this weekend. The game on Sunday is a Star Wars game for a friend’s bachelor party (I’m playing a failed Jedi), and Saturday’s game (the reason behind this post) is an impromptu one-shot Pathfinder game for a friend-of-a-friend who is in town for a brief while.

I didn’t know what to make for the Pathfinder game, then about half an hour or so ago it hit me- I should make that draconic bard I was talking about last year! We’re starting at 9th level, so hopefully being a bard will not be so terrible. 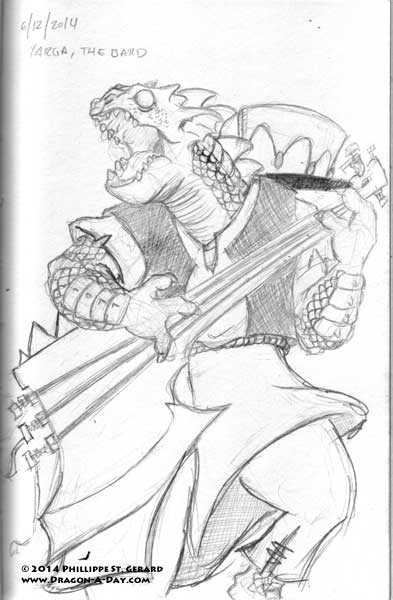 I changed his scales to a diamond pattern- in the interests of game balance I am probably going to shy away from the actual dragon subtype and instead make him a nagaji, which is a humanoid created by the naga, as far as I understand it. I made An Effort to make the scales fit together; once I got the hang of it it was pretty easy, though ending the pattern was something of a problem in places.

In the interests of keeping it as metal as possible, I’m looking at the Sound Striker archetype because the idea of playing music that literally hurts people sounds appropriate. Thundercaller also sounds fun, though. Savage Skald also seemed like a good idea, but the abilities kind of pale in comparison.

Finally, the title has to do with this musical movement, as well as some Pentel 2H leads I got- they’re absurdly hard compared to the Staples leads, with an almost waxy feel. Compared to how I was working with past leads, I feel like I’m scarring up the paper with these super-hard inserts.