Sorry about the gap; the last few days have been very busy and sleep has been at something of a premium.

So I played in that Pathfinder game I mentioned a day or two back. Yarga Midgaardsson and his merry metal band went on a journey to the Hidden Shrine of Tamoachan, converted to Pathfinder from 4th Edition D&D.

However, I’m getting a bit ahead of myself.

Because it was a one-shot game, there was a lot of character optimization and not as much characterization at first- when the DM asked everyone to tell the table about their characters, there was a lot of hemming and hawing along with looking around waiting for someone else to speak up- except for Josh (the friend-of-a-friend, and the reason for the game), who had been planning his character for 3 months or so.

In my own defense, I was ready, but to paraphrase Shakespeare, I hesitated when I saw others hesitate.

Darla Bratwood was a half-orc with recessive genes who eventually went off on her own to become an adventurer. She ended up in a kind of crummy town in the middle of a swamp, and would occasionally go out and do Adventurer Things there.

The rest of the table was still kind of stymied at this point, so I jumped in. Darla was on an adventure in the swamp one day, when she heard music coming from the swamps towards her. A hulking, scale-covered figure wearing a spiked breastplate and carrying what looked like a cross between a greataxe and a guitar emerged from the vegetation. This unlikely creature began exhorting the glory of Metal. Darla wasn’t exactly sure what Yarga meant, and sometimes it even seemed like he didn’t know, but he proved to be a boon companion in the days to come- he would play on that strange weapon of his and she’d get totally amped.

In short order, the other players latched onto this idea and became members of Yarga’s band without me even trying to suggest it- I figured I would just be playing this goofball dragon-man who played annoying-but-helpful music, but within moments, people were allotting leftover skill points to Perform skills and explaining their roles in the band:

Anyhow, our manager had gone missing, and we were approached by a halfling whose interests intersected with ours. He gave Zaigan a scarab of some kind (it saved his life at least once), and the rest of us a map. Having been handed The Adventure, we decided on our band name (names like “Velvet Chuul” and “Adamantine Juggernaut” were bandied about, but when we found ourselves in front of a crowd, we ended up with the name “Deeper Darkness“), and then went adventuring.

We wandered around a dungeon for awhile, filling out the track list of our first album (Metallicide) as we went. Each track was based on something that happened in-game, and dutifully recorded by John. The explanations for the track names will give away what happened, so I’ll put them at the bottom. Highlights included being betrayed by a giant crab, Darla getting dominated by a vampire, and water being the most deadly part of the dungeon.

Then we ran afoul of a beholder.

The beholder only wanted us to break a rune that was keeping it prisoner in the room we found it in, but having already been betrayed by the crab (it sent a pretty nasty vampire to kill us after we spared it) and knowing that the beholder would probably kill us out of principle even if the crab had been honorable, we declined and tried to outrun it. 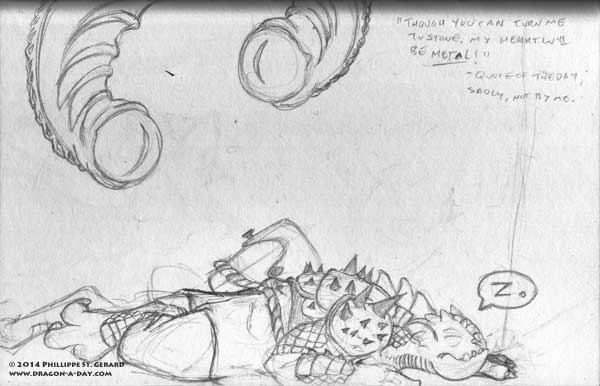 “Though you can turn me to stone, my heart will be METAL!”
-Quote of the day, sadly, not by me.

A few eye rays later, Yarga was asleep, then petrified. The rest of the party made it out, except for IRL, who was stuck on the far side. IRL tried a few tricks to circumvent the room, but the accursed nature of the dungeon prevented her from doing it. Ginally, the party decided they’d rest and then fight the beholder on the next day, telling IRL that they would come back for her. We had also looted a break enchantment scroll along with a raise dead scroll from a nereid, so the plan was to steal Yarga’s petrified body and give IRL enough time to run through, if we couldn’t kill the beholder.

A dramatic battle ensued. Darla’s mighty shield bashing and a well-placed fire snake by IRL finished the creature, but the beholder disintegrated Yarga’s body as a last spiteful act.

However, the reincarnate spell just requires the remains of a creature, regardless of their condition, and Yarga came back to life as a (confused, naked) dwarf.