Once upon a time last year, I had to wait a week or so and vigilantly dodge spoilers because I missed Sharknado.

This time was different. I cleared my calendar well in advance and made plans to see it with some friends. On the way, I even drew this, because I was so prepared: 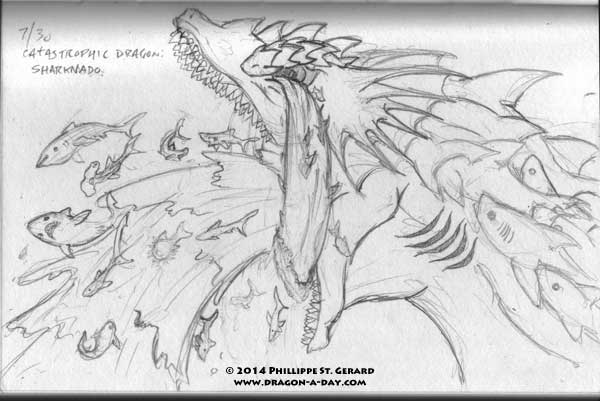 “It’s a dragon with sharks in its mouth, so when it roars, it shouts sharks at you.”

Unlike the other catastrophic dragons I’ve toyed around with (with the possible exception of Plague), a Sharknado is a curious combination of organic and inorganic components. It’s a lot of meteorological hoo-ha that involves dumping a lot of water into a place, along with the requisite number of sharks, so naturally, the dragon’s breath weapon (as well as the “energy” that leaks from its eyes) is just an enormous torrent of water filled with murder-crazy sharks that defy physics.

I did think of just making the dragon a mass of sharks shaped like a dragon, not unlike a cartoon bee swarm, but I decided that that wouldn’t be the same. Besides, who’s gonig to believe sharks flying around under their own (mystical) power, anyway?

Oh, and the movie was definitely better than the first one, except for the fact that I actually live in New York City and don’t really understand what the writers were thinking in having the city be so unprepared for a cataclysmic weather event .