I’ve probably said it before, but I hate life drawing. I just don’t like it. Never have, don’t know if I ever will. At the same time, I recognize how important it is, if nothing else because it forces me to draw people for a few hours every so often, which is useful for when I’m drawing human-shaped things.

Because of this, I’ve on and off idly considered the idea of doing some sort of Regular Human Drawing, to stay in practice, but never made it a real thing. Anyhow, I’m kind of rambling because I drew an anthropomorphic dragon tonight (and did some sketching of a human figure last night), and felt woefully out of practice. I’m hoping it’s because I’m tired and the construction lines got away from me somewhat, but I have a feeling that lack of practice is also at play here: 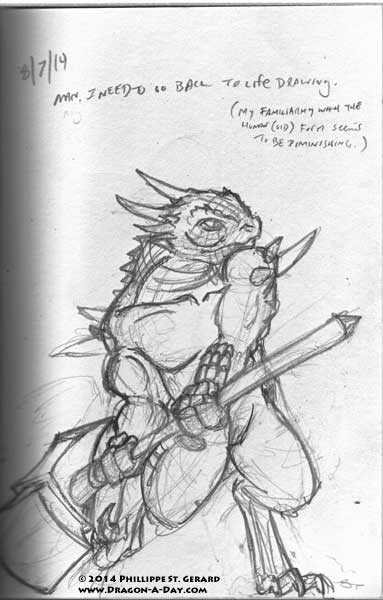 Only time will tell, I suppose.