“The cockatrice’s strange hatching process seems like it ought to have more of an impact on how the dragon actually looks,” I said to myself as I sat down to play Starcraft.

The idea that the cockatrice might take on one of two distinct forms based on the creature that incubates the egg was an interesting one, reminiscent of the Evolution Missions from Starcraft II: Heart of the Swarm (and probably what subconsciously led me to the mental leap above).  For those of you unfamiliar with the concept (and unwilling to sit through the longish gameplay video linked above), in HotS, you are allowed to choose how your creatures adapt as the game progresses. You’re presented with two fairly different choices- one adaptation might be movement speed while the other reduces build speed, for example. The newly evolved units change from that point onward visually as well, to reflect the decision that you made.

So in the decision of serpent vs. toad, what do you pick? 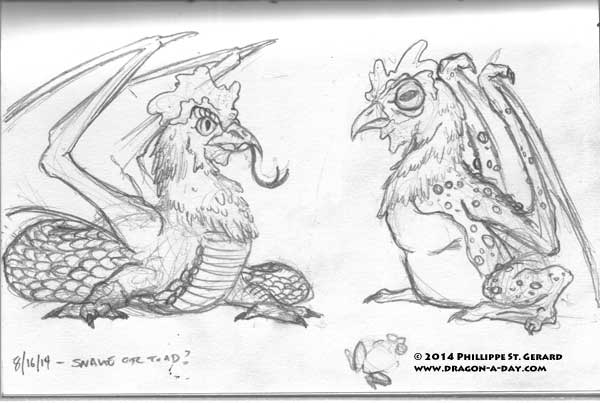